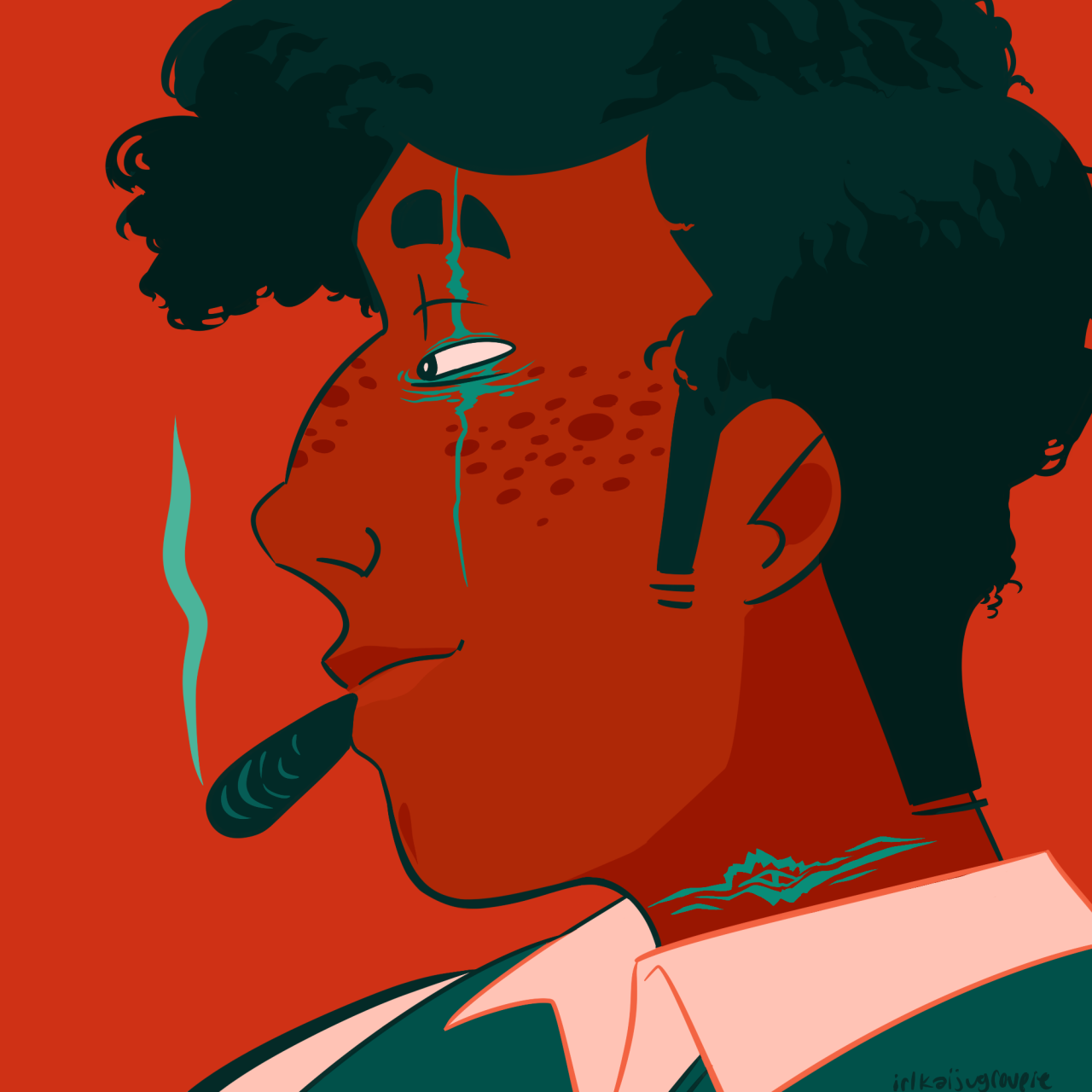 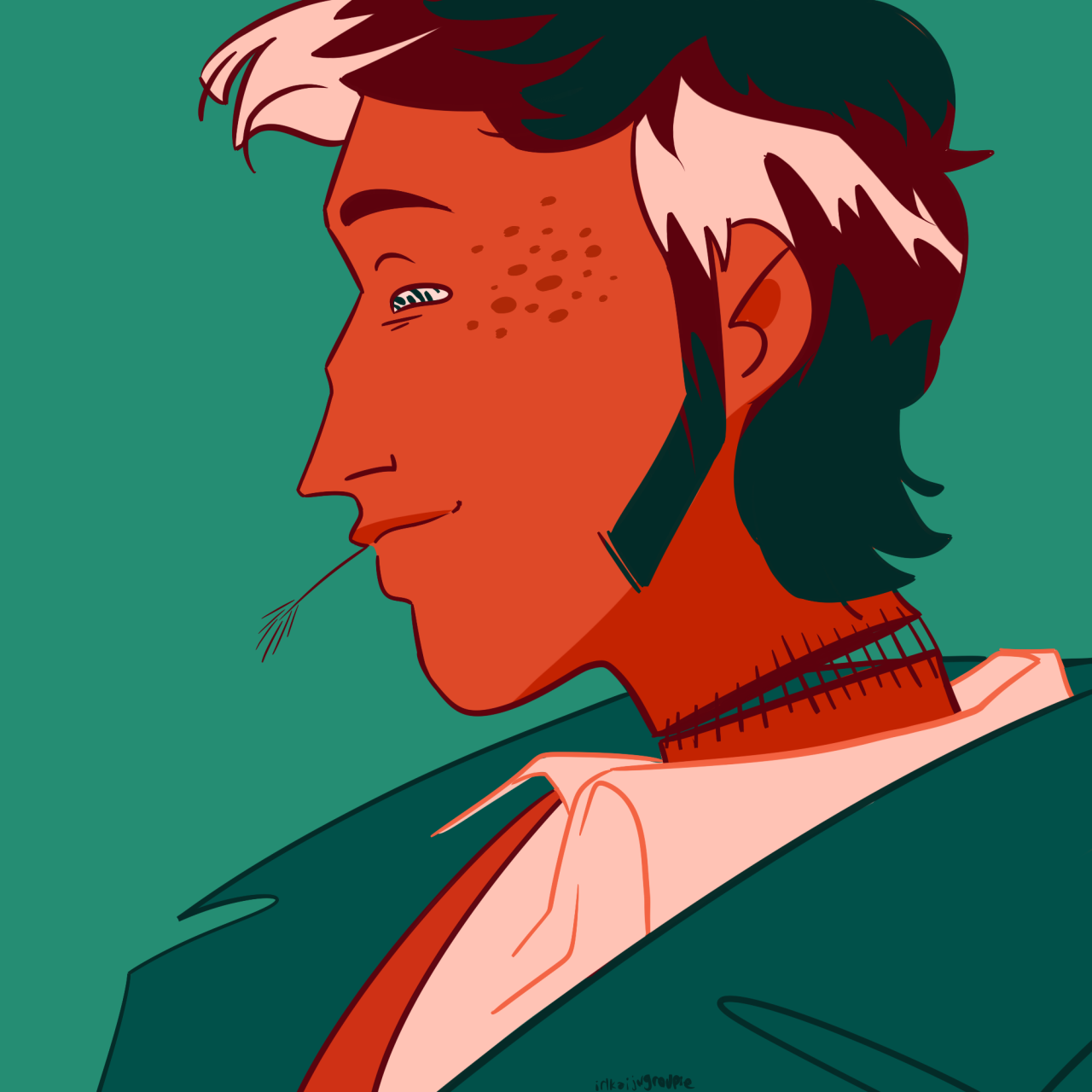 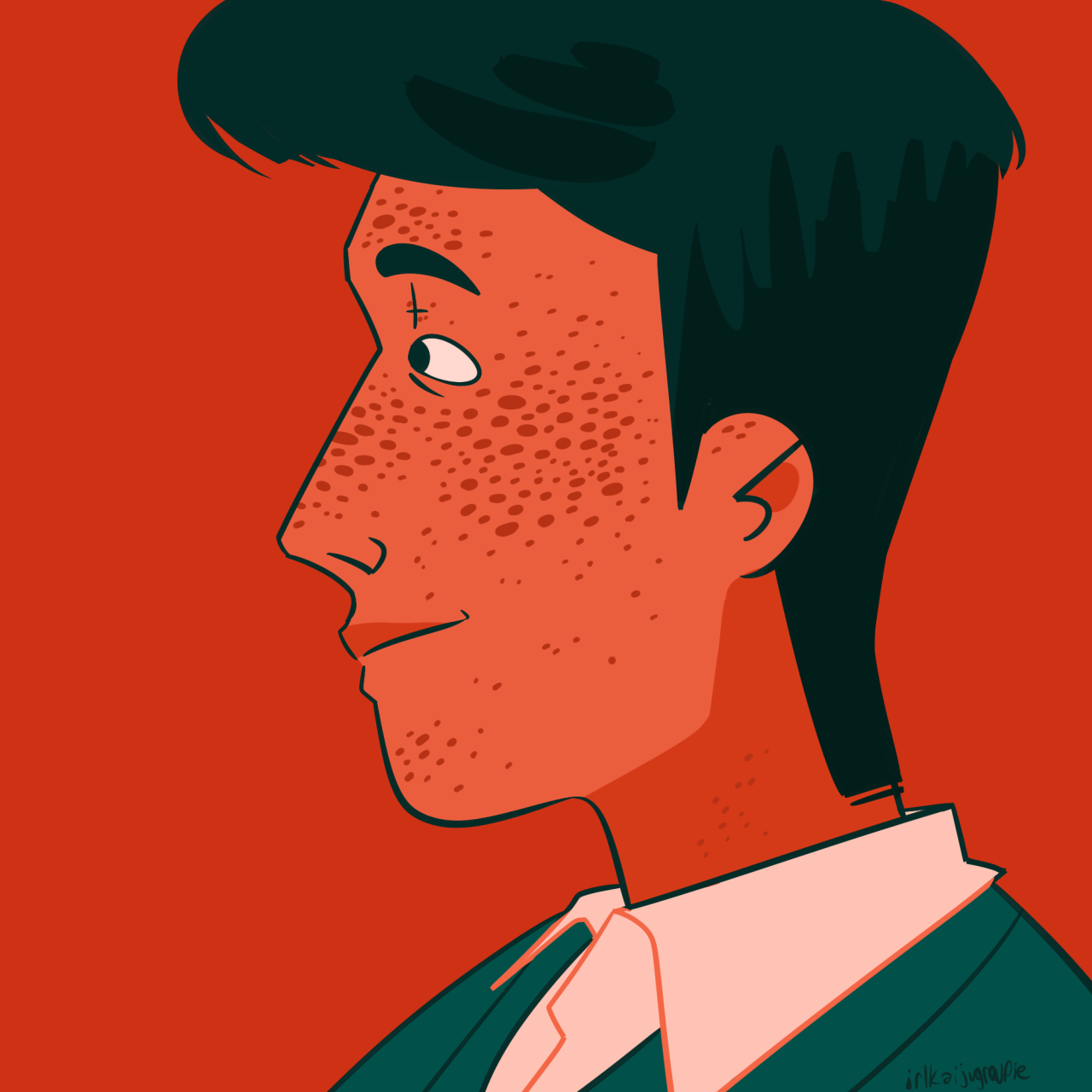 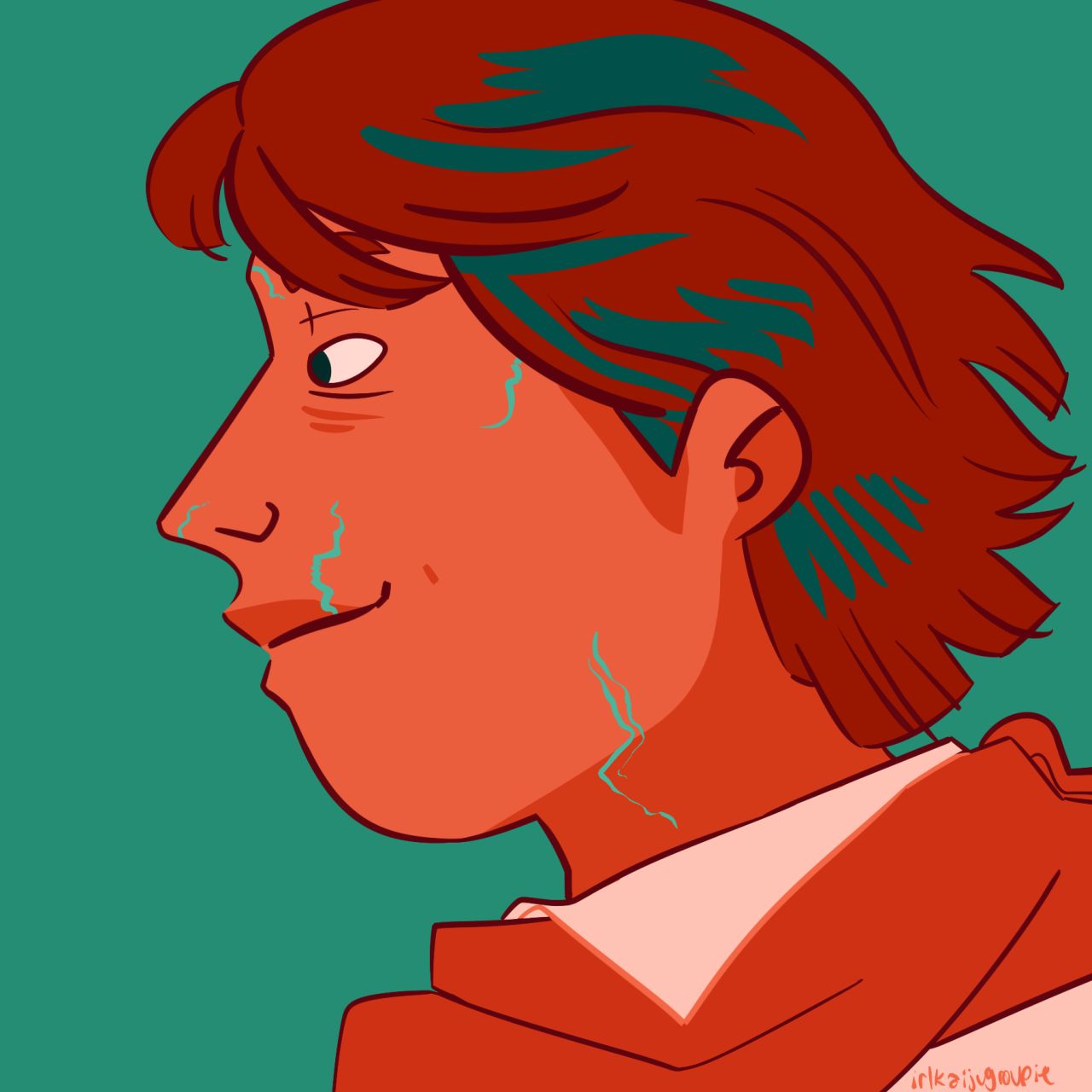 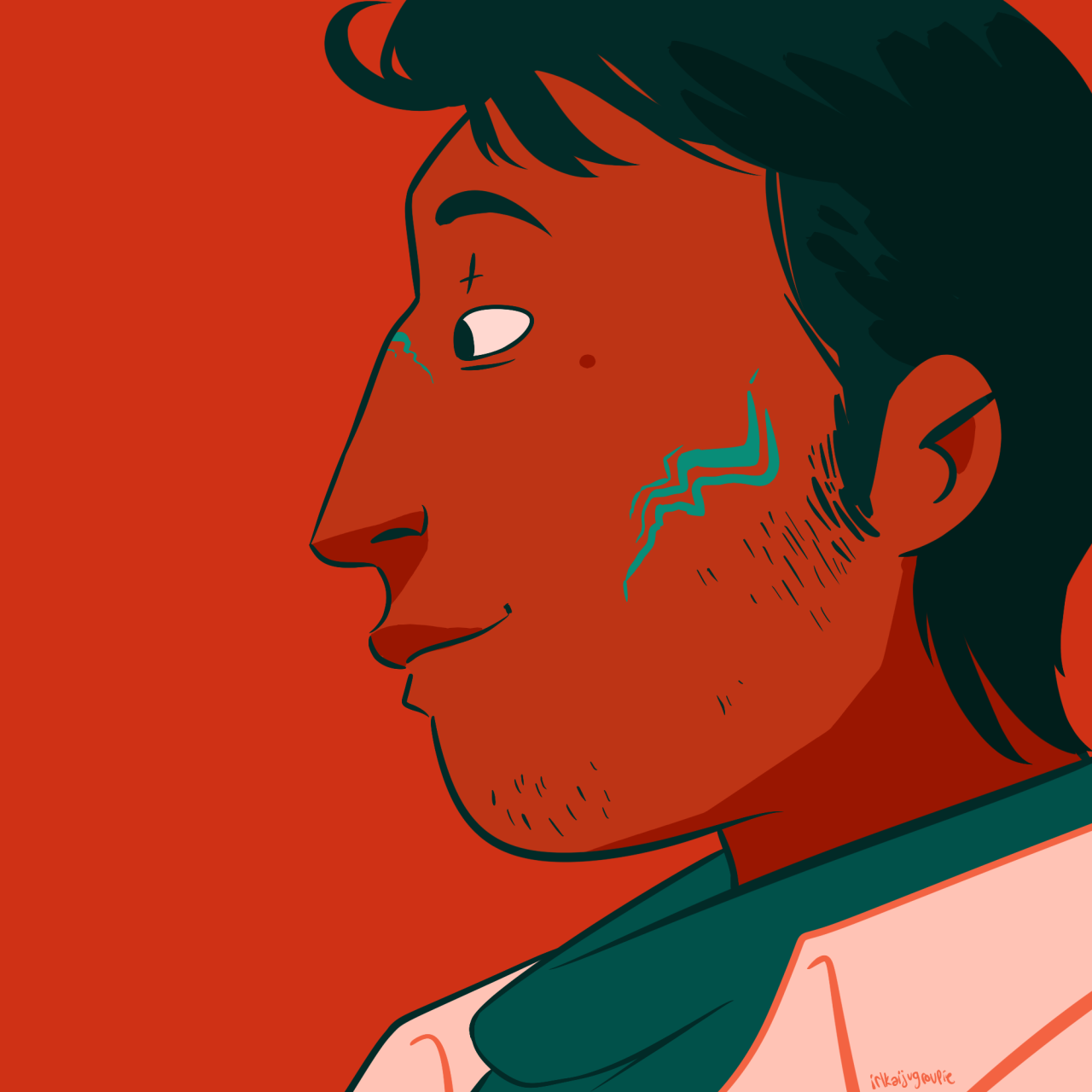 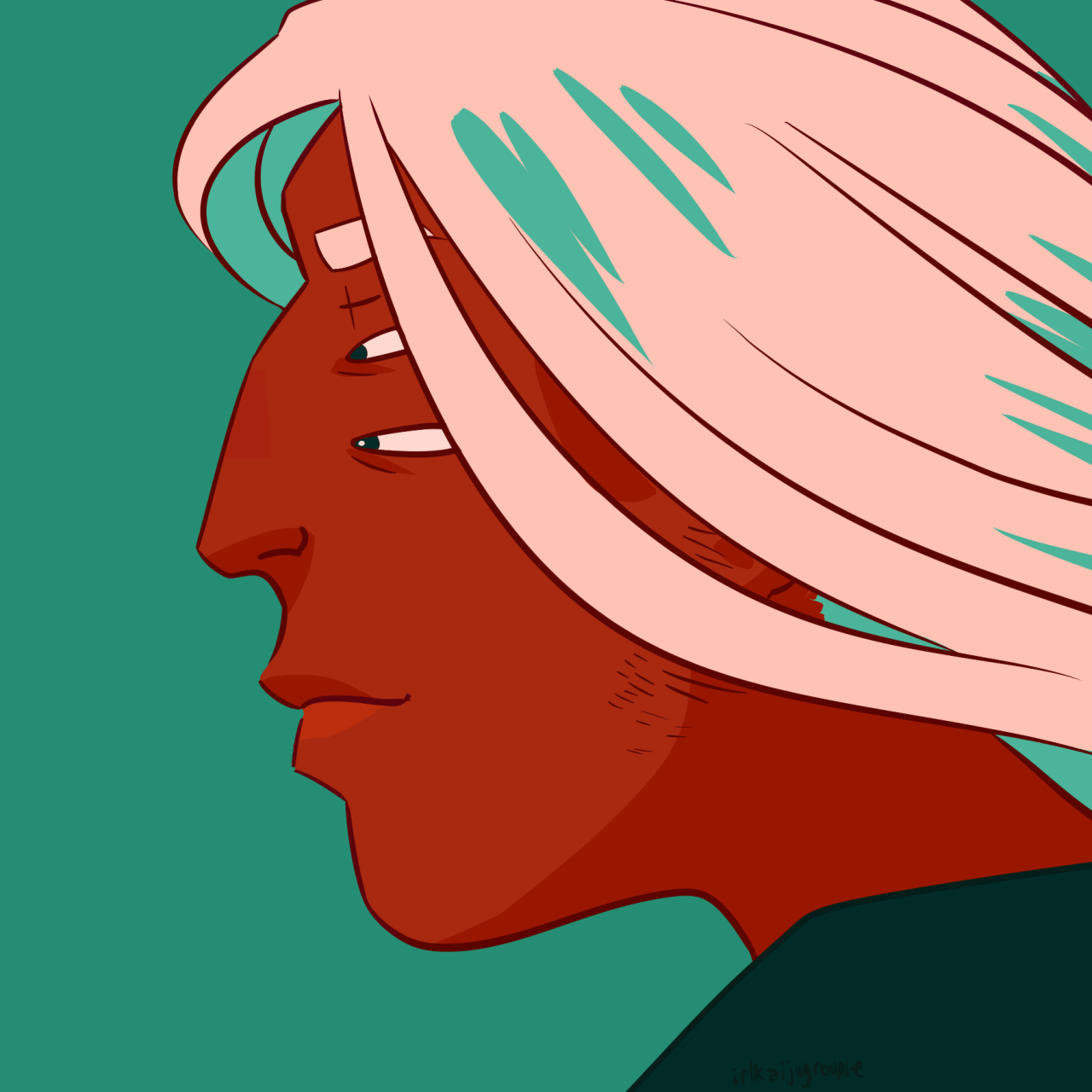 Some icons, in a sense, for some of the characters and friends of Sergeant Stephens. In order they are: Ulysses Stephens himself, his boyfriend Oscar, an old war comrade of his Mordecai Joffe (yes, he's related to Ichabod and Itzhak Joffe), his best friend and future org founder Ada Hayes, his coworker Mateo, and his friend Helga. I quite like all these people, and doing these was fun and relaxing. They all have such interesting faces... and necks, in Oscar's case...

Image description: A set of six icons, all with the color palette of brick red and reddish orange and cyan.

The first shows Ulysses, a Black man, smiling and leaning his head forward in a relaxed fashion. He has dark skin, and a crooked nose that curves down near the top like it is aquiline but then rounds and flattens out near the bottom. His hair is short, black, and in tight curls. Freckles dot his cheeks, and he has a cleft chin. Running down from his left forehead to cheek is a long scar, magical in nature, and running along the side of his neck is a similar one. Perched between his smiling lips is a lit cigar.

The second shows Oscar, an olive skinned person who's head is only holding on by the thread of their sutures. They have a long, pointy nose that was once broken, and their short and straight hair has patches of pure white in it. They have long sideburns. Their eyes have no iris or pupil, but instead splotches of black, like a glass frog. Freckles dot their cheeks, and they smile cheekily with a piece of wheat in their mouth.

The third one shows Mordecai, a light skinned man with a long face that is completely covered in freckles, freckles, freckles. His hair is black and cut very short, and his nose is long and flat. He smiles, a bit nervously.

The fourth one shows Ada, a light skinned woman with a round face and confident smile on her face. Her brown hair is cut messy and short, but not quite long enough to tie back. Her nose is straight and pointy, and all across her face there are scars curling across her skin. On her forehead, jaw, nose, and up from her lip.

The fifth one shows Mateo, a brown skinned man with a round face and easygoing smile. He has an aquiline nose and smooth black hair. There's a mole on his cheek by his eye, and two small scars: one around his cheekbone area and one on the bridge of his nose. He has stubble on his cheeks and chin.

The sixth one shows Helga, a dark skinned woman with shockingly white hair, long and flowing. She has an aquiline nose, some stubble, and a grim smile on her face. She also has an extra eye resting below her normal left eye. Her hair flows over her cheeks and down her shoulders. END ID