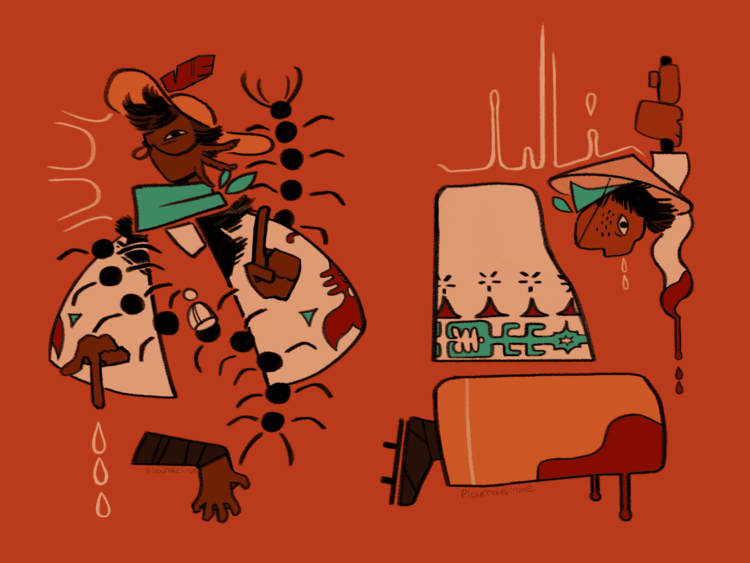 Image Description: Digital art in simplistic shapes, with shades of clay red, brown, and accents of light cyan. On the left, the axolotl-man Emile is entwined with a large centipede, with one hand pointing up and the other pointing down. On the right, Lieno stares with a wide eye as she holds a wavy-bladed keris beside her head. Blood stains both her pants and the knife, and she weeps a bit. End ID.

The Centipede & The Executioner

Messing around with simple shapes !

Both of these little things are based off of a talyo'a card, aka this world's sort-of equivalent of tarot, I.E. a card deck with symbolic associations to each card.

In the green lands, centipedes are commonly depicted as decoration in art, clothes, et cetera due to their associations with cleanliness. In Muqegaia specifically however, where these cards come from, and in the context of the card, the Centipede represents impulsivity and spontaneity. Reversed, it represents overdoing your scrutiny, or to quote Orson Welles: "hysterical tinkering."

The Executioner may be a bit more obvious. Upright it represents violence of all sorts, along with generally just hard tasks to do. Reversed it represents meditation and careful, peaceful contemplation, but also avoidance of such tasks. Bowing or slumping forward is an association with the Executioner card, in both thoughtfulness and raising your blade.

I really enjoyed coming up with the 16 major talyo'a cards and their symbolisms, so applying them is very satisfying! I may do more of these with other characters, but no promises.