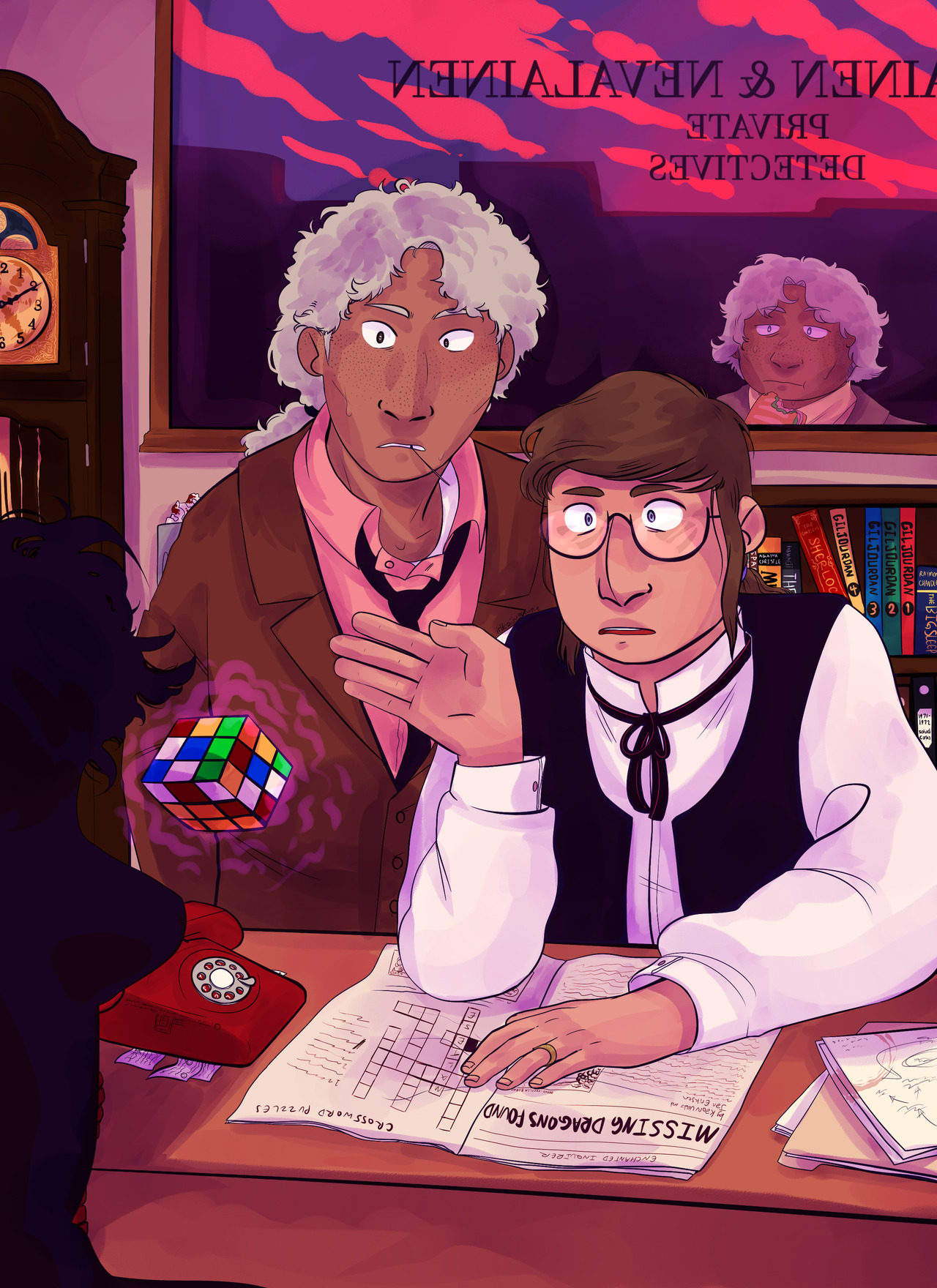 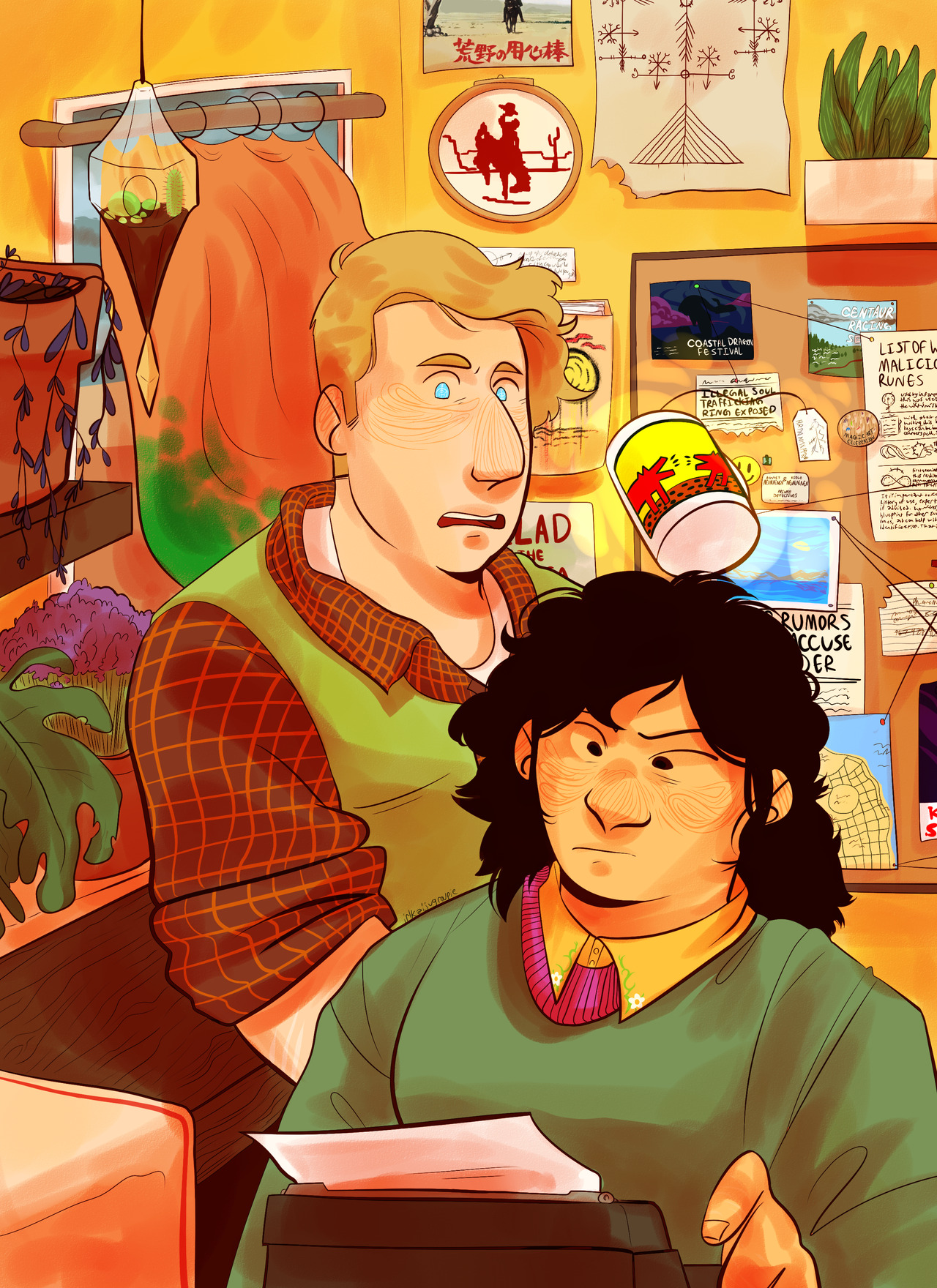 This is one of the first arts that really made me grow into the Kaoru & Jan world. We've got the Nevalainens - the wife and wife detective team - at the office (with Kielo's slacker younger brother Santeri hanging out outside) and then the titular Kaoru and Jan themselves. I really wanted to emphasize the little details in these. (And all those details contributes to the absolutely fucking gigantic image description)

The picture on the left is in a deep purple and pink color palette. Agnes Nevalainen is a light-skinned woman with brown hair, a round face, long nose, and glasses. She is wearing a black vest, a puffy white dress shirt with the collar popped, and a loose black tie. She is sitting down in a chair behind a table, and is talking to an off-screen client with a professional facial expression. Her right arm is gesturing in the air, and her left arm is resting on the table, right above a newspaper. On the newspaper, there is a headline reading “Missing Dragons Found” and also a crossword puzzle filled out halfway through. Also on the desk are a red rotary phone with strips of paper placed underneath, and a stack of paper and manila file folders. Hovering in the air is a scrambled Rubix cube, with a magic aura around it. Standing up behind Agnes is her wife Kielo, a freckled, dark-skinned woman with sharp cheekbones, light grey hair, and a toothpick in her mouth. She has a stern look on her face. She is wearing a pink dress shirt with the collar down but with the top two buttons loose, a black tie, and a dark brown blazer.

In the background, there is a dark brown and gold grandfather clock, along with a large window. Under the window there is a bookshelf with various detective books on it including “Gil Jourdan,” “Sherlock Holmes,” and “The Big Sleep,” and some file folders. Outside the window, there is a dark purple sunset sky with bright pink clouds, and the silhouette of city buildings can be seen. On the window, there is text that reads “Nevalainen & Nevalainen Private Detectives” and right outside there is Kielo’s brother, Santeri Nevalainen, looking in with a vaguely panicked look on his face. He is eating a sandwich.

The picture on the right is in a light orange and yellow color palette. Kaoru Ueda is sitting down in front of a typewriter. They are a Japanese individual with messy shoulder-length black hair and a pensive look on their face. They are wearing a bright yellow collared shirt with floral decorations on the collar, and a rich green sweater with a magenta collar. Leaning on a table behind Kaoru is Jan Eriksen. He is a light skinned heavyset man with a large hooked nose, blue eyes with runes instead of pupils, and short wavy blonde hair. He is wearing a white binder, a brown and orange plaid collared shirt that is halfway unbuttoned and with the sleeves rolled up, and a lime green vest. He is saying something to Kaoru, and is drinking from a white mug, with a decoration remniscient of Kieth Haring’s “Barking Dogs” that is floating in the air. A tea tag is coming out of the mug, and runes can be seen written on it.

To our left side of Jan there are a multitude of plants on shelves and in a terrarium hanging from the ceiling. Next to those plants is a small window with an orange curtain with a green spill on it of some kind. On the other wall are a lot of posters, along with a large corkboard. On that wall there is an aloe vera plant on a shelf, a crosstitch of a bucking cowboy, a large protection galdrastafir, a Japanese poster for “A Fistful of Dollars,” a file folder with a childishly drawn beach painted on, and another poster that partially reads “Ballad of the salt sea.” On the corkboard is a poster titled “List of well known malicious runes,” a newspaper clipping that reads “Illegal soul trafficking ring exposed,” a card that reads “Centaur racing,” another card that reads “Coastal dragon festival,” a button that reads “Magician art festival,” the Nevalainen’s business card, a button with a smiley face on it, a photograph of the ocean, a map of the town, a newspaper clipping that is partially cut off, but “Rumors,” “Accuse,” and “-der” can be read, and finally a poster that is partially cut off, but a “K” and “S” can be read. END ID