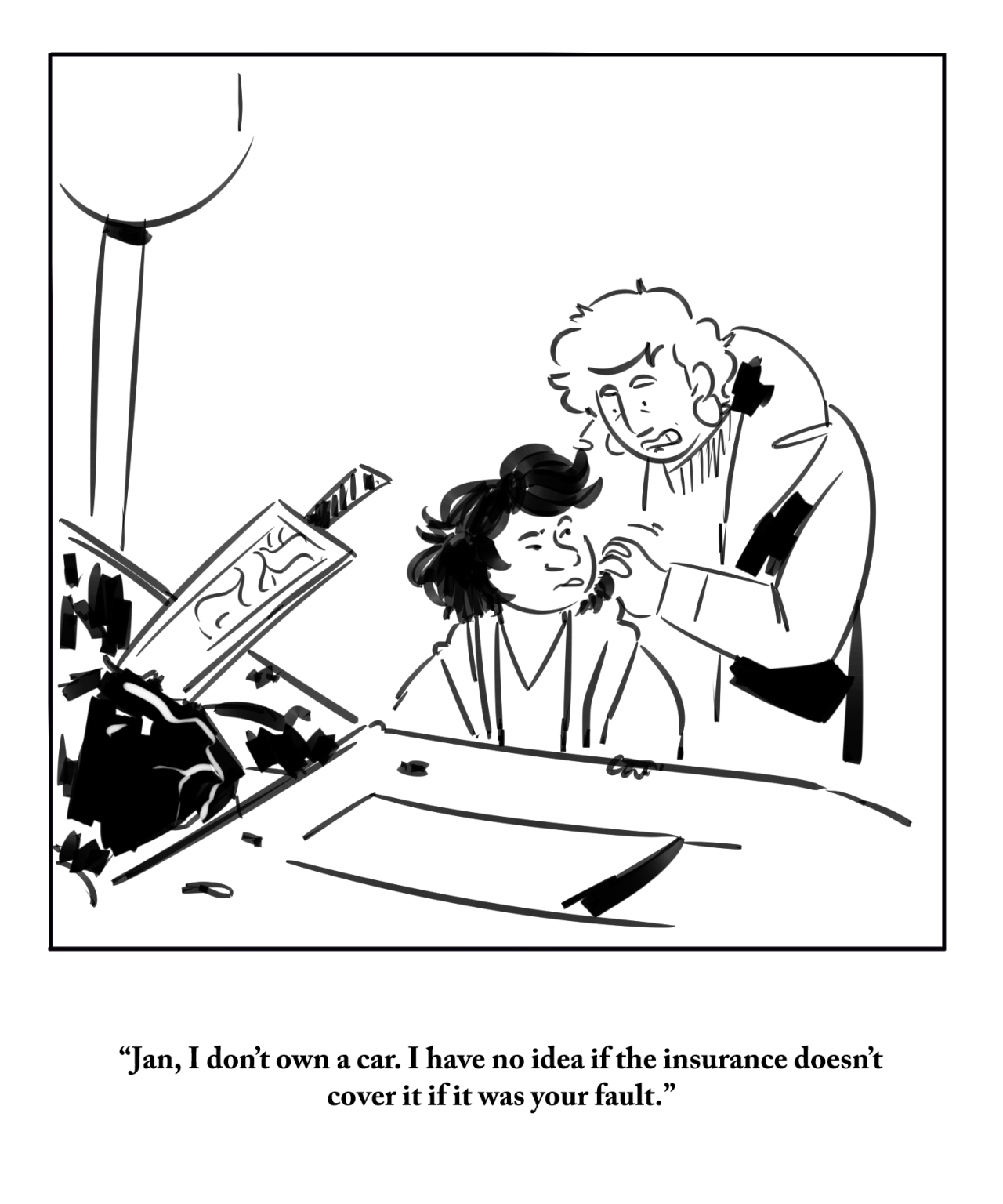 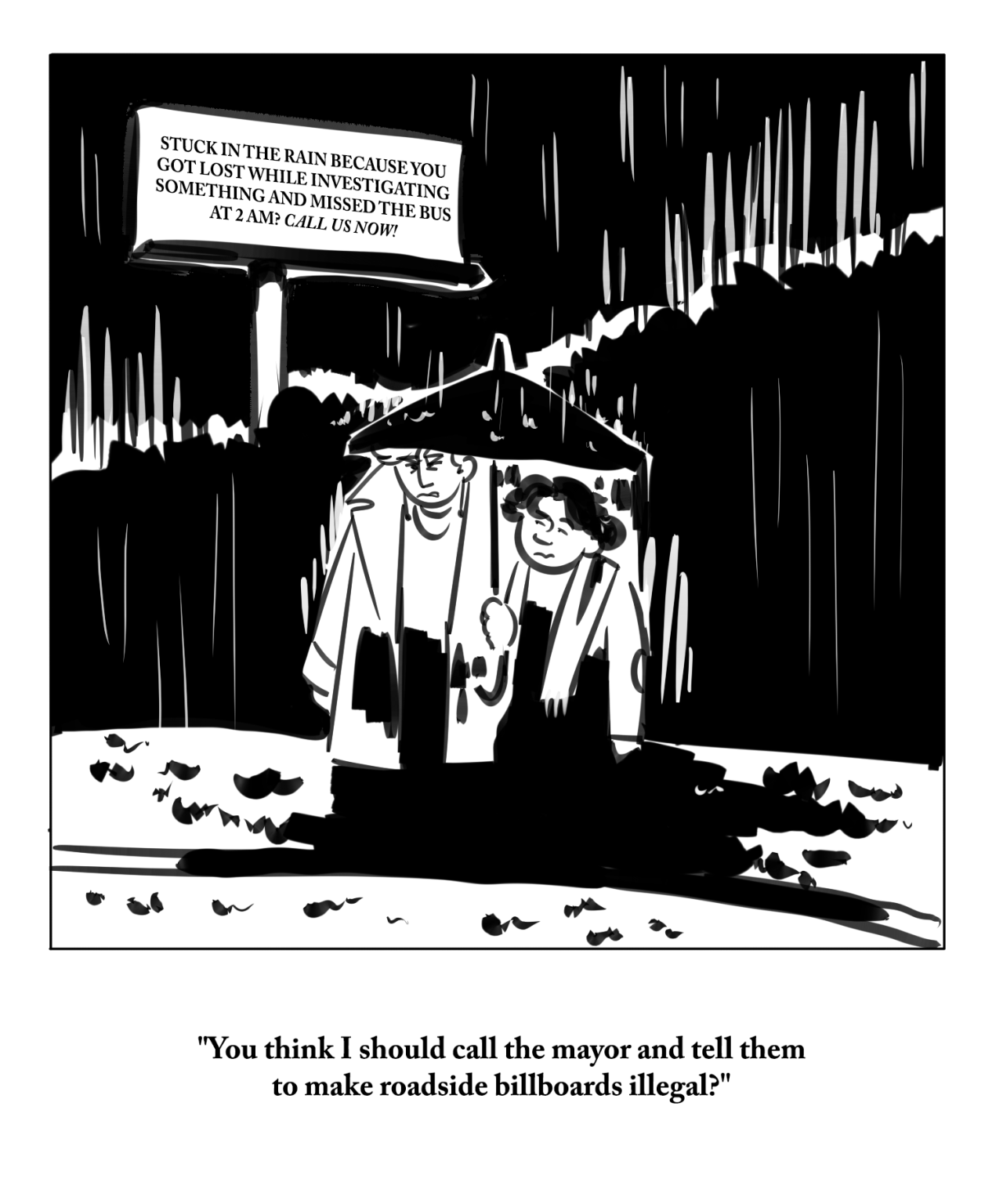 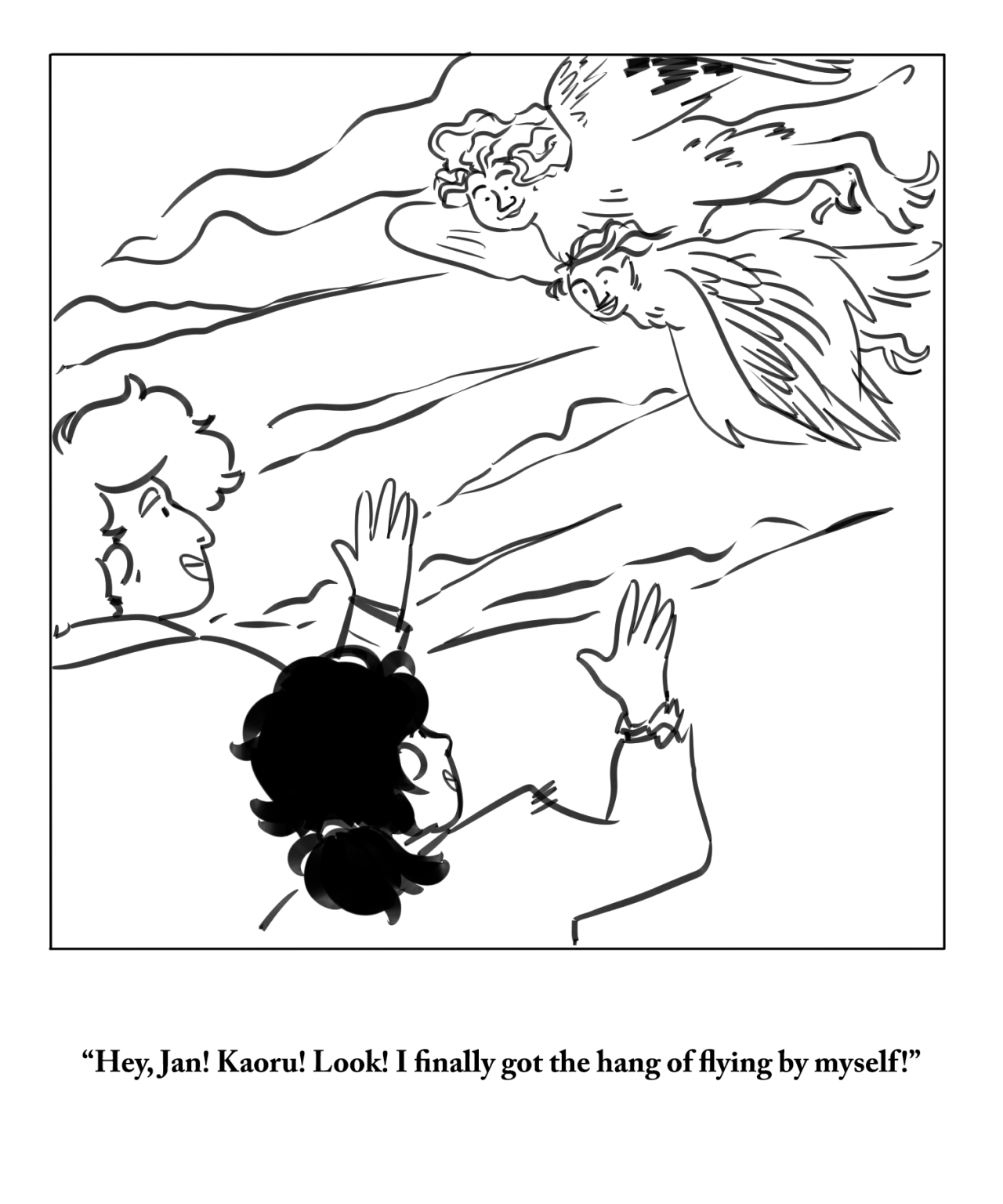 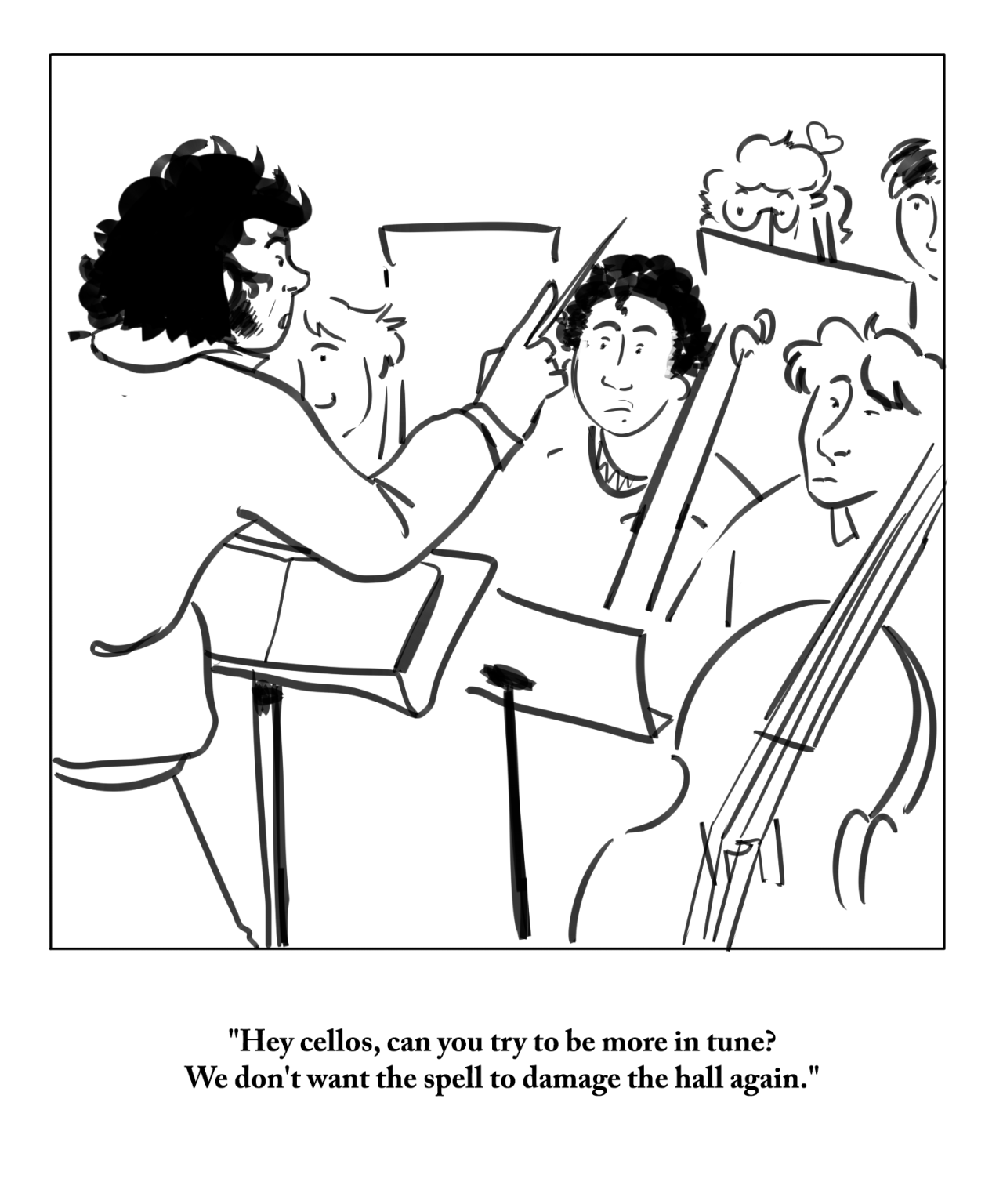 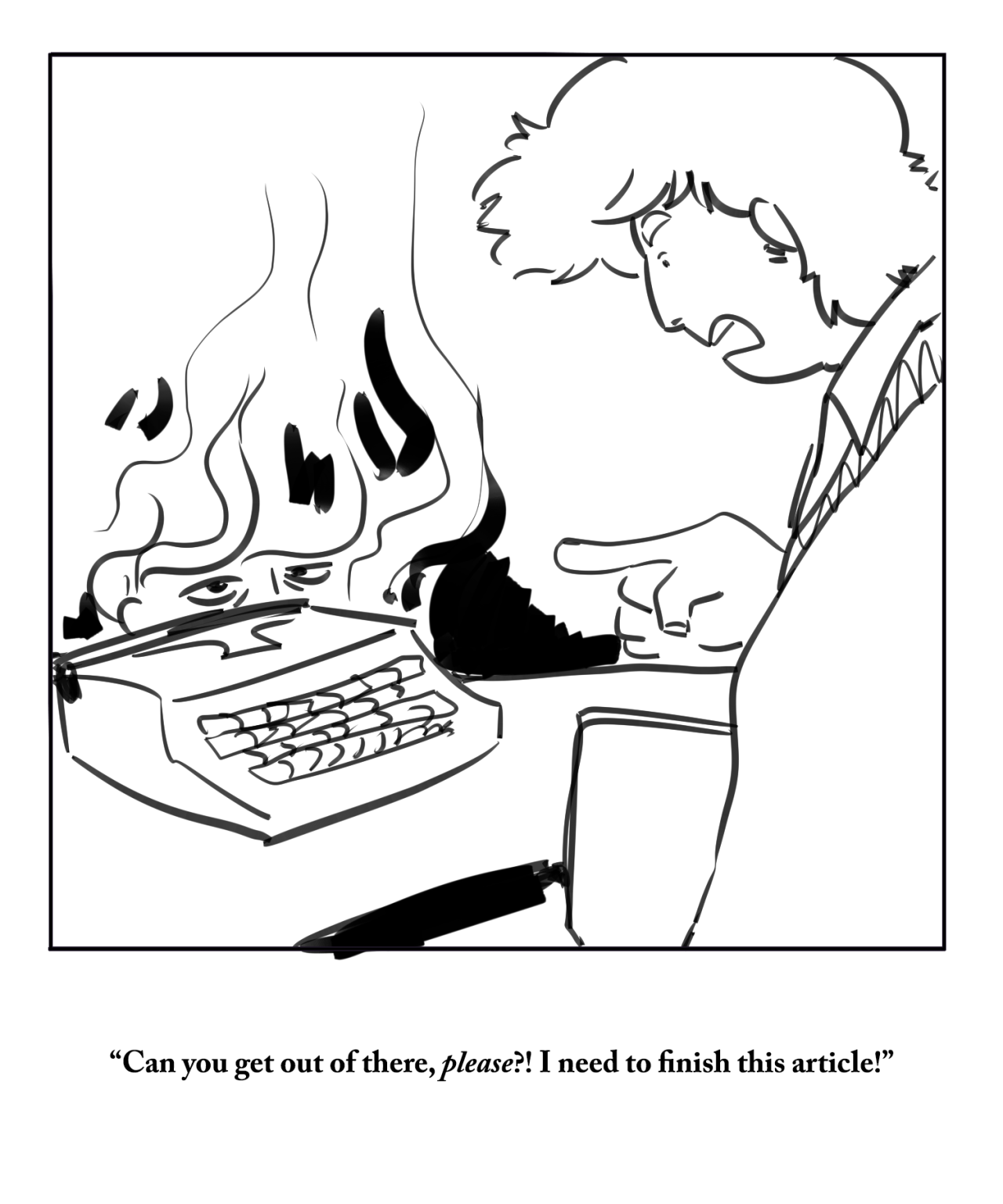 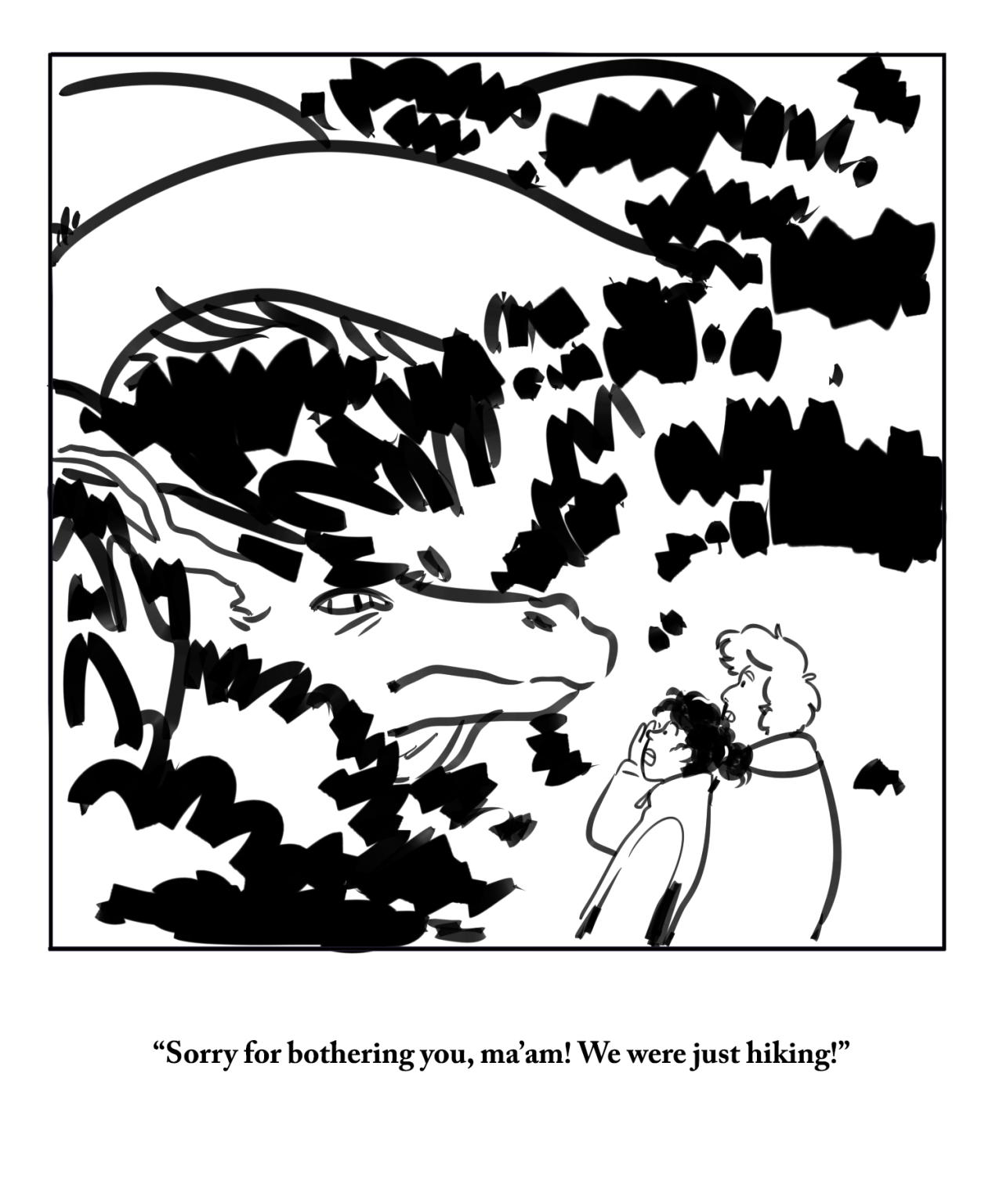 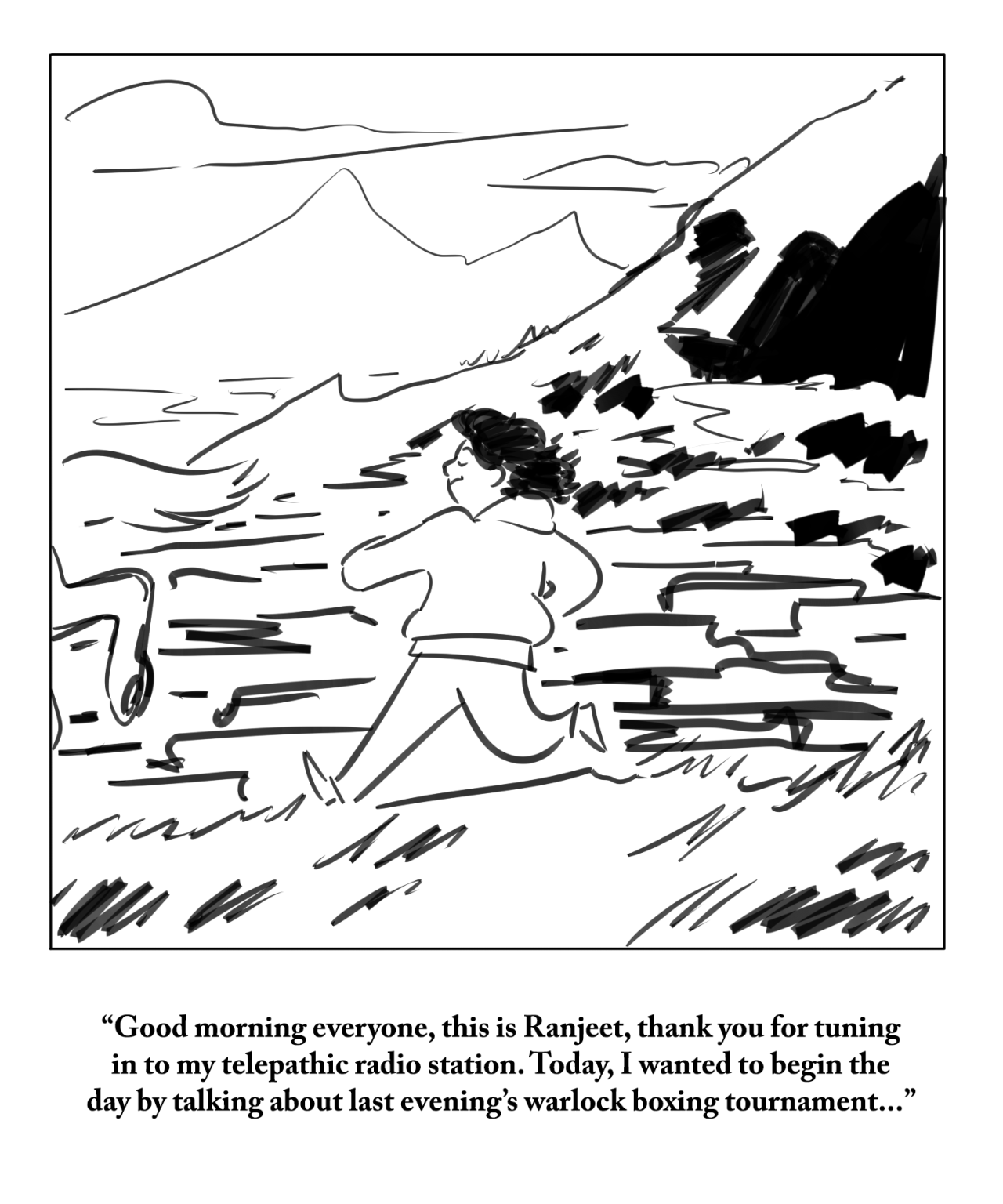 Second week of these little funnies!

Jan looks down at Kaoru, wringing his hands in anxiety, while Kaoru rests their hand atop the hood of Jan's car with a tired expression on their face. The front car window is completely smashed due to a huge, rectangular bladed, and intricately carved sword stuck right through the glass. Kaoru says: "Jan, I don't own a car. I have no idea if the insurance doesn't cover it if it was your fault."

Kaoru and Jan huddle in the rainy woods on the side of the road as a downpour descends above them. Behind them, a large advertisement billboard says STUCK IN THE RAIN BECAUSE YOU GOT LOST WHILE INVESTIGATING SOMETHING AND MISSED THE BUS AT 2 AM? CALL US NOW! Kaoru looks up at an annoyed Jan as he says: "You think I should call the mayor and tell them to make roadside billboards illegal?"

Kaoru and Jan look up and wave excitedly at a mother and child pair of harpies who fly alongside each other. The child excitedly says: "Hey, Jan! Kaoru! Look! I finally got the hang of flying by myself!"

Sifiso Zhao, bearing a slightly annoyed look, waves their conductor's baton and speaks to the cello section of their orchestra, saying: "Hey cellos, can you try to be more in tune? We don't want the spell to damage the hall again."

Jan, with a pile of papers under his arm, berates the equally as annoyed ghost living inside of his typewriter, saying: "Can you get out of there, please?! I need to finish this article!"

Kaoru and Jan stand next to each other in hiking gear, looking nervously at a huge dragon, coiled and curled among the forest brush, regarding the two of them with the stink eye. Kaoru, hand to their mouth, says to her: "Sorry for bothering you, ma'am! We were just hiking!"

Kaoru does their morning jog with a satisfied smile upon the ridge of a hill that looks upon the entire town and the mountains that crest over it. They listen, though without headphones, to a radio host saying: "Good morning everyone, this is Ranjeet, thank you for tuning in to my telepathic radio station. Today, I wanted to begin the day by talking about last evening's warlock boxing tournament..." END ID