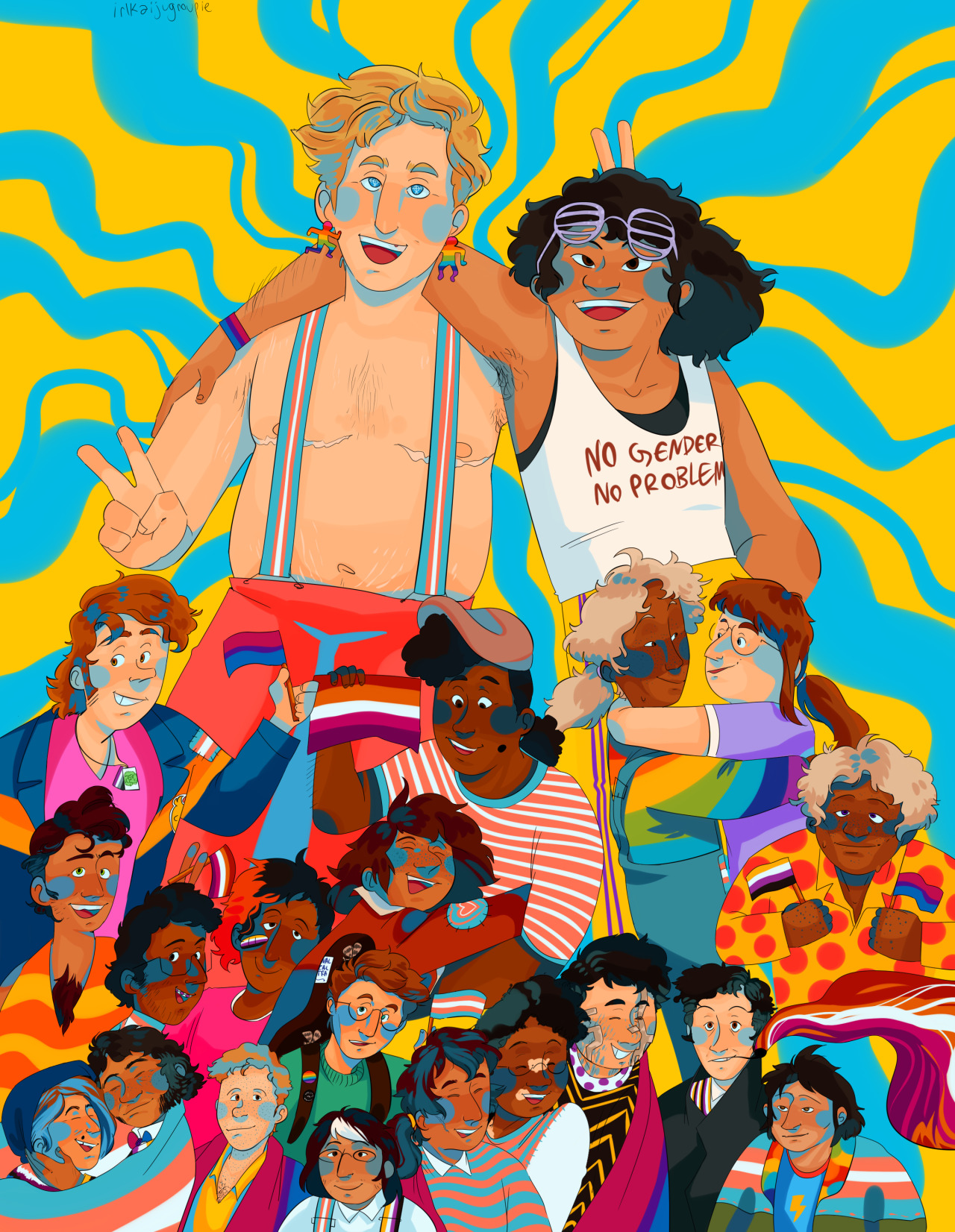 A big ol' picture made for pride month. I'd imagine a pride parade in a world where magic is normal would be extravagant and wonderful.

Also, extremely sorry for the really long image description, it's just this image is super chunky.

Image description: Digital art, a group picture of lots of characters. The background is vivid yellow with bright blue wiggly stripes. At the top are two people: a plus sized white man named Jan and his best friend Kaoru, a Japanese person. Jan has tousled blond hair and a bright smile on his face. He has rainbow earrings of Keith Haring style dancing people, and is wearing no shirt, showing off his top surgery, and is wearing bright red pants with suspenders that have the trans flag stripes on them. Kaoru has their right arm slung over Jan's shoulders. They have messy shoulder length black hair and they also have a wide smile. Propped up on their forehead are lavender colored shutter shades. They are wearing a black binder and a white tank top with text that reads "NO GENDER NO PROBLEM."

By their legs are a bunch of their friends, coworkers, and neighbors. Peder, a pale man with reddish-brown hair in a mullet, smiles and is holding a bi flag. He is wearing a jean jacket with orange stripes and a trans flag patch. He also has dog tags with an asexual flag and green carnation. Cecilia is a black woman wearing a flat cap and wearing a striped t-shirt with trans flag colors. She holds a lesbian flag and hugs her girlfriend, Sonia. Sonia is a brown woman with shoulder length spiky hair and her brown jacket has a patch with a heart made of the trans colors. Kielo and Agnes are two women embracing each other. Kielo is a brown woman with light curly grey hair wearing a rainbow sweater and jean overalls with a trans flag patch on it. Agnes is a white woman with brown hair tied back with a trans flag hair tie and a lavender t-shirt.

Danai is a brown woman with short curly hair and prominent chess hair. She is grinning, and in her hand she holds a lesbian flag. Santeri is a brown man with light curly grey hair and a smile on his face. He has a yellow shirt with red polka dots, and is holding a nonbinary flag and bi flag. Khidr is a brown man with curly hair and big square glasses. He has a turtleneck with trans flag stripes. Button is Khidr's sibling, and a bandaid on their cheek has the nonbinary flag stripes. Their curly hair is partially dyed red. Harlan is a white man with a cyan sweater, glasses, and light wavy brown hair. He is holding a trans flag and his cello case strap has a rainbow flag pin on it. Moths sit in his hair.

Embracing each other are Zuzana and Sifiso. Sifiso is a mixed person with big sideburns and wild hair. Their bow tie has the trans flag. Zuzana is an olive skinned woman with greying brown hair and a loose headscarf, and her shirt has the genderfluid stripes. Slung around both of their shoulders is the trans flag. Ichabod is a pale blond man with freckles all over his face wearing a yellow button up and shawl with the colors of the bi flag. Next to him is Hafiz, a brown person with chin length dark hair. In the center of their forehead is a streak of white hair. They are wearing a white button up and their suspender straps have the trans and nonbinary flag stripes.

All hugging each other are three people: Aspen, Gina, and Atlas. Aspen is a brown man with a sweater with wavy stripes the color of the trans flag, and his hair is pulled back in a ponytail. Gina is a black woman with vitiligo patches between her eye and on the corner of her mouth. She is wearing a trans flag sweater similar to Aspen's. Atlas was a pale man with choppy hair and sheets of metal curling around his scarred face. His sweater has the nonbinary flag colors. Swept around all three of them is a big bi flag. Devora is a very thin pale person smoking a pipe. They are wearing a big black jacket, a vest with the nonbinary flag colors, and a button up. Out of their pipe is a stream of smoke with the lesbian flag colors. Andrei is standing next to Devora, much shorter than them. He is an asian man with choppy chin length hair and tired eyes. His jacket has trans flag stripes on it on the shoulders, green on the lower chest and arms, and the collar has blotches of the rainbow. His shirt is blue with a lightning bolt patter.