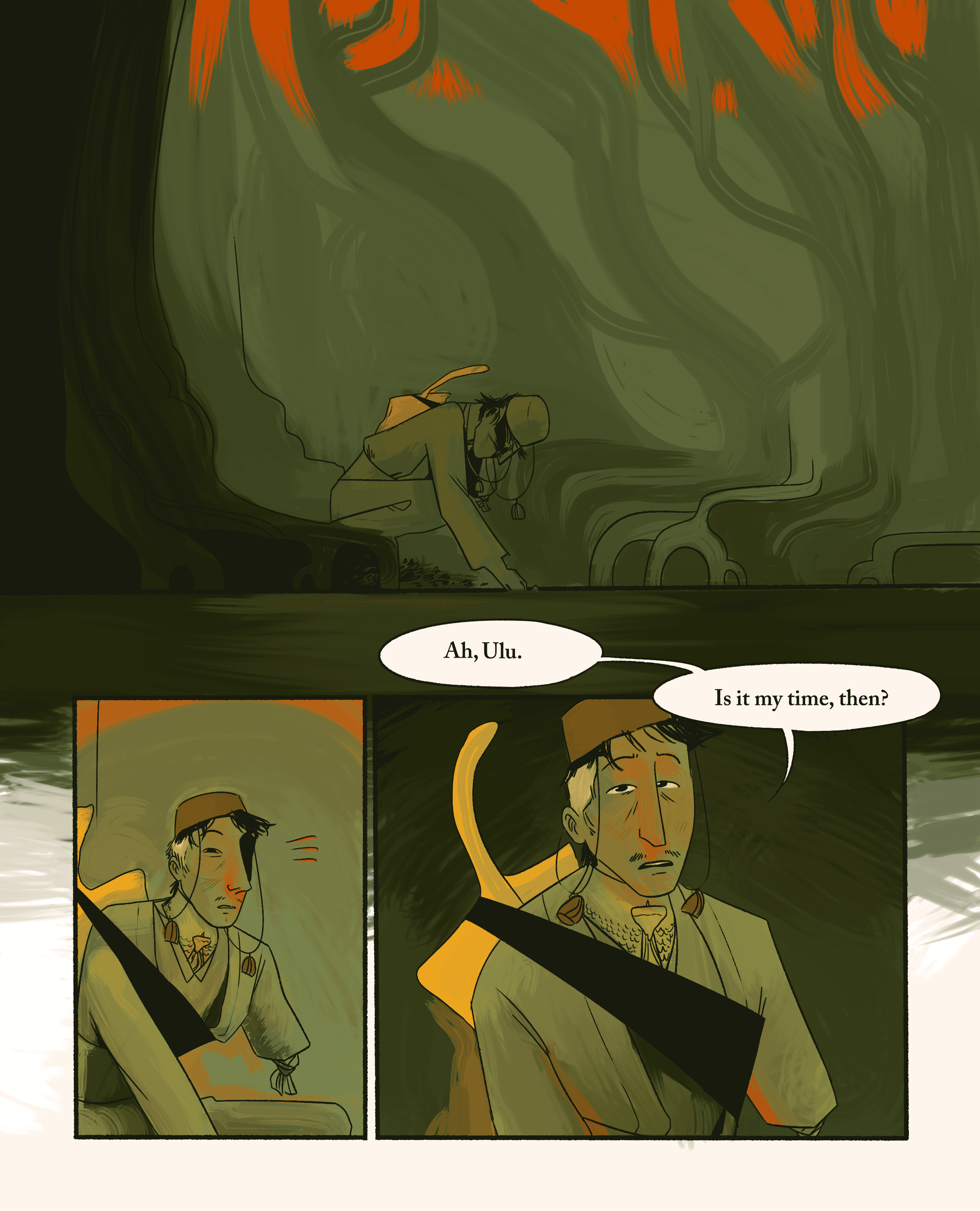 In a darkened swamp, under a low orange sky, within the twining trunks and roots of the swamp trees, Márime kneels by some tree roots and extends his hand into the water.

Something startles him, and he looks up. He has a long, thin face, with a small pencil moustache and grey hairs at his temples. Strapped to his back is a huge glowing cleaver of a sword. He wears a round, flat-topped hat with no brim, and two strings coming off of its end, with one tuft on each. His other arm ends at the tricep. 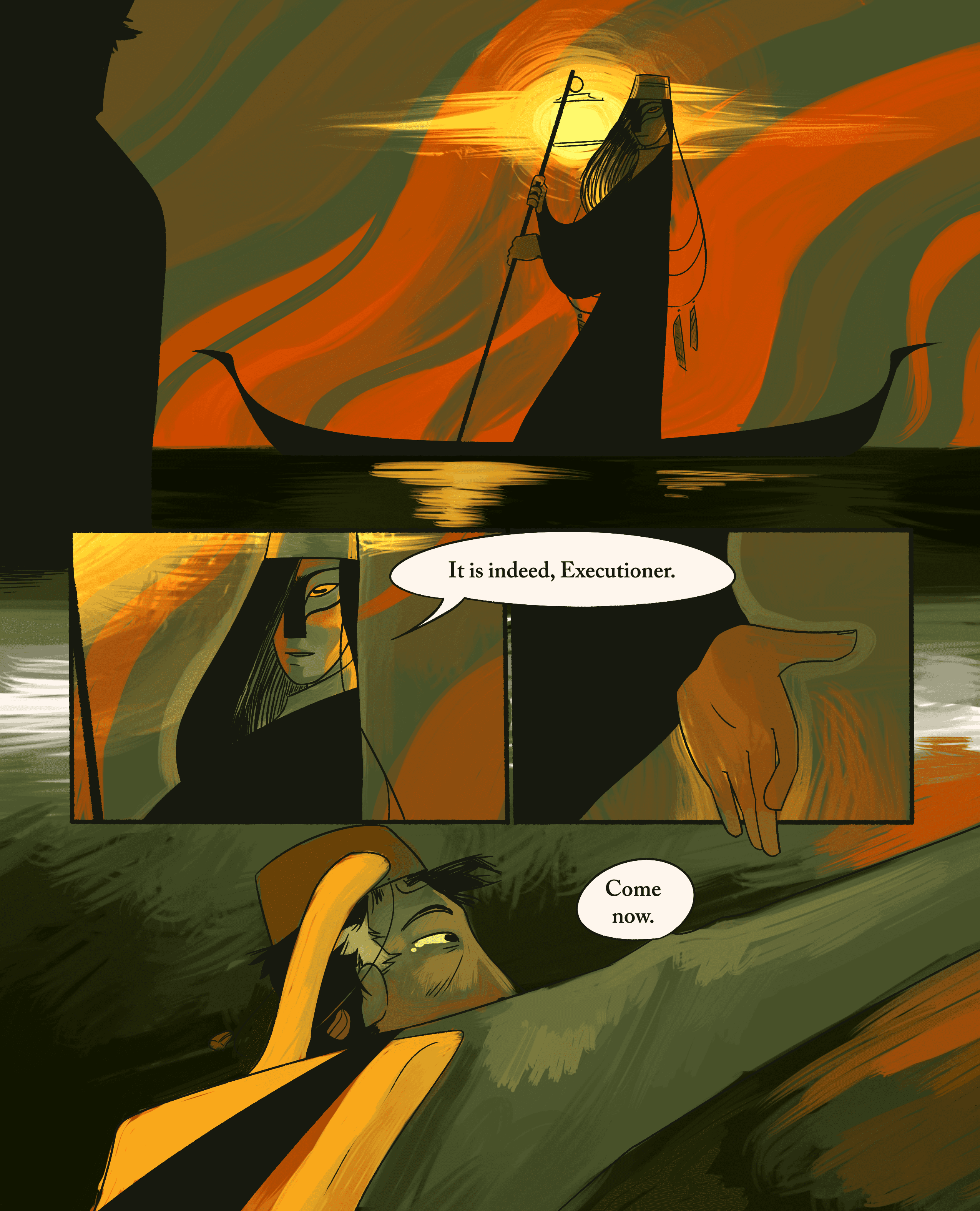 The mists of the swamp curl up from the water, and coasting along the top the aformentioned Ulu stands tall in their canoe on the waters. They're a tall, calm slightly inhuman presence, and the vivid lantern light from the end of their oar slices through the mist.

They look at him with a flat-pupiled eye, and they hold out their hand.

"Indeed it is, Executioner," they say. "Come now."

Márime takes the hand and allows himself to be dragged to stand, though tears come to the corner of his eyes. 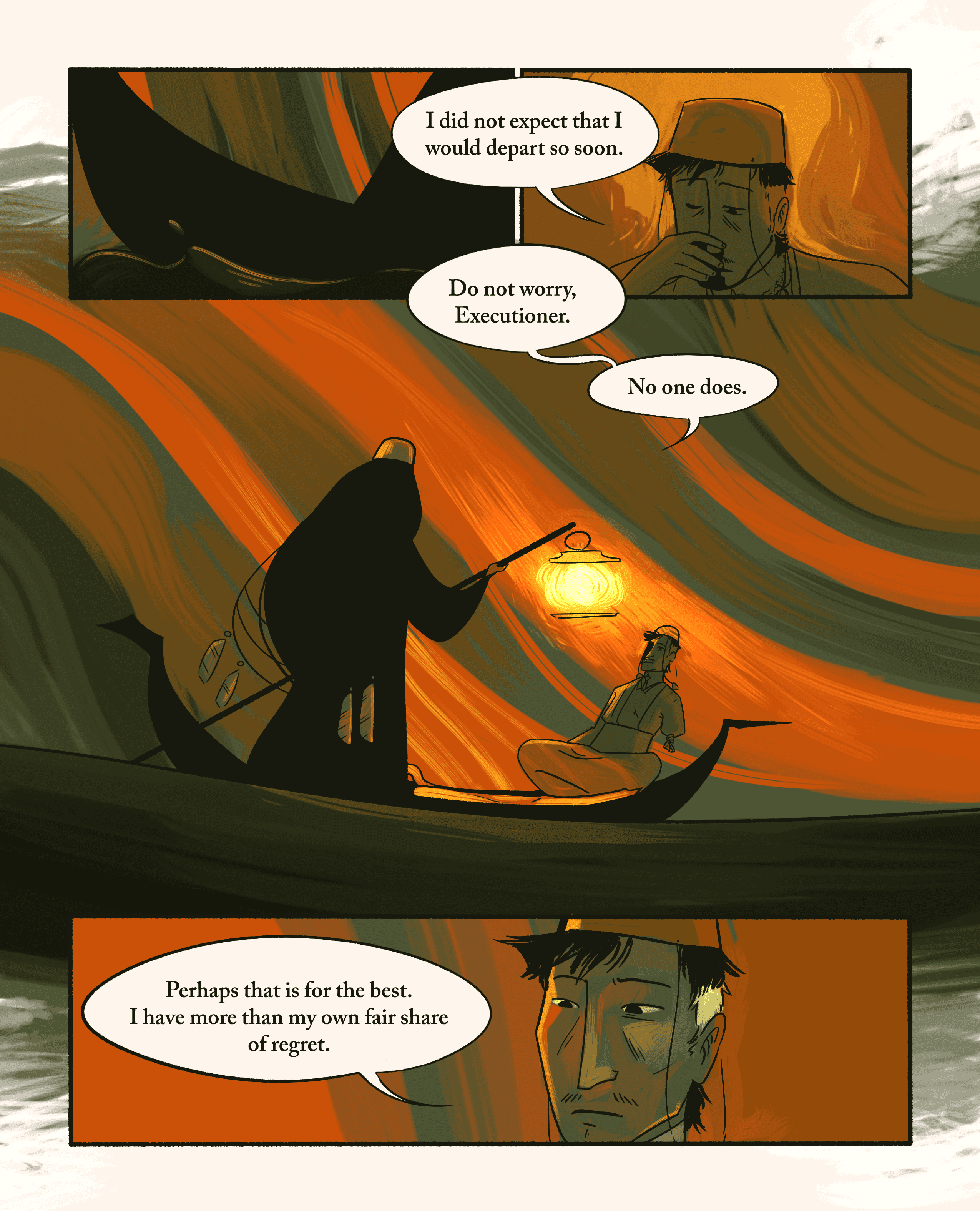 The swamp waters splash out of the way of Ulu's boat. Márime is now sitting cross-legged opposite Ulu, with his sword between the two of them. His face is drawn solemn.

"I did not expect that I would depart so soon," he sighs, fingers resting on the side of his nose.

Ulu pushes their oar through the water, the lantern at the top end spearing through the mist. "Do not worry, Executioner," they say. "No one does."

Márime drops his hand. "Perhaps that is for the best. I have more than my own fair share of regret." 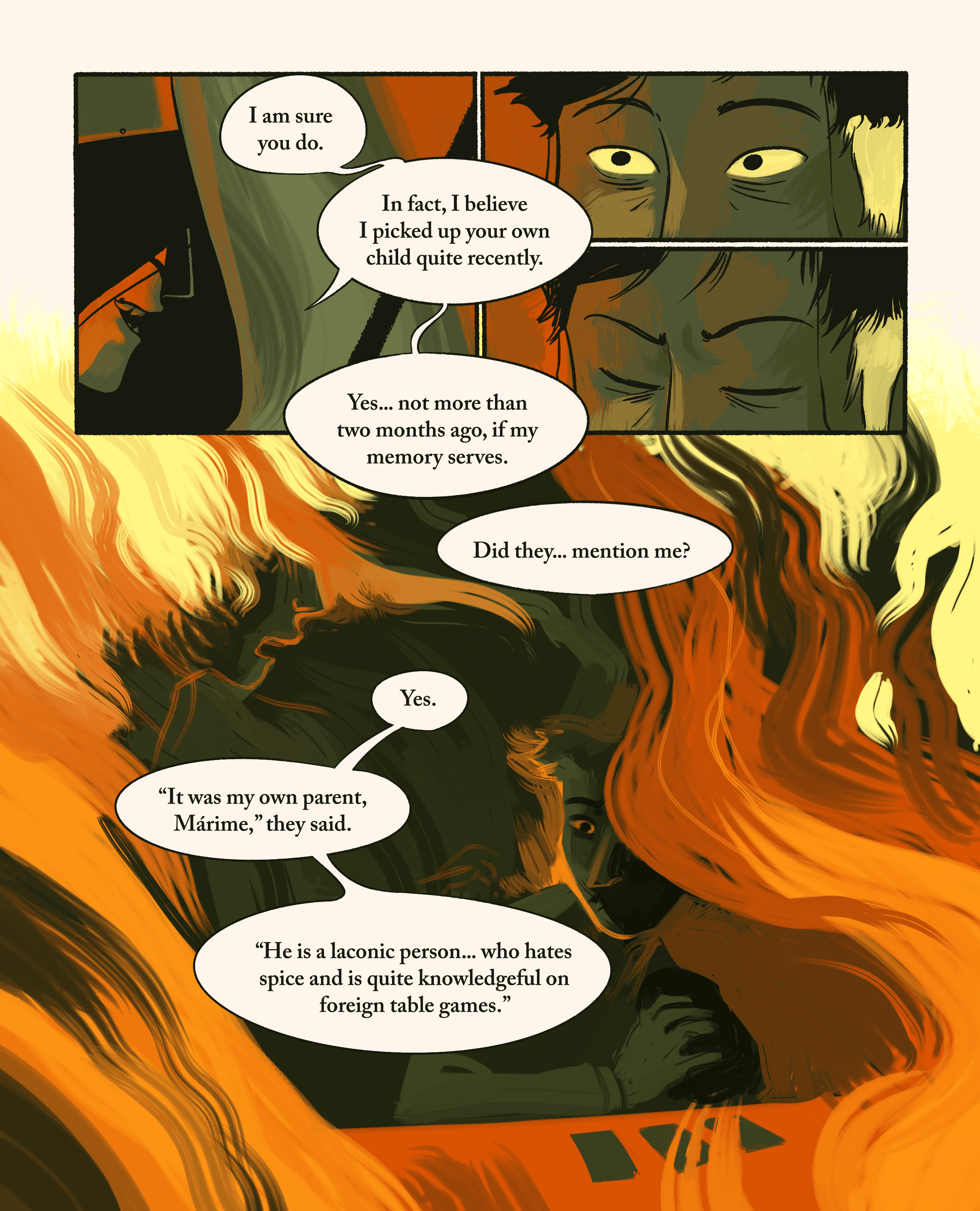 "I am sure you do," they say. "In fact, I believe I picked up your own child quite recently. Yes... not more than two months ago, if my memory serves."

"Yes." Ulu says. They quote them. "It was my own parent, Márime," the child had said. "He is a laconic person... who hates spice and is quite knowledgeful on foreign table games."

In the mist Márime can almost see his memories -- memories of himself, sitting at a table, with three cards in front of him and a drinking gourd in hand. He listens with wide eyes as someone tells him of something urgent. 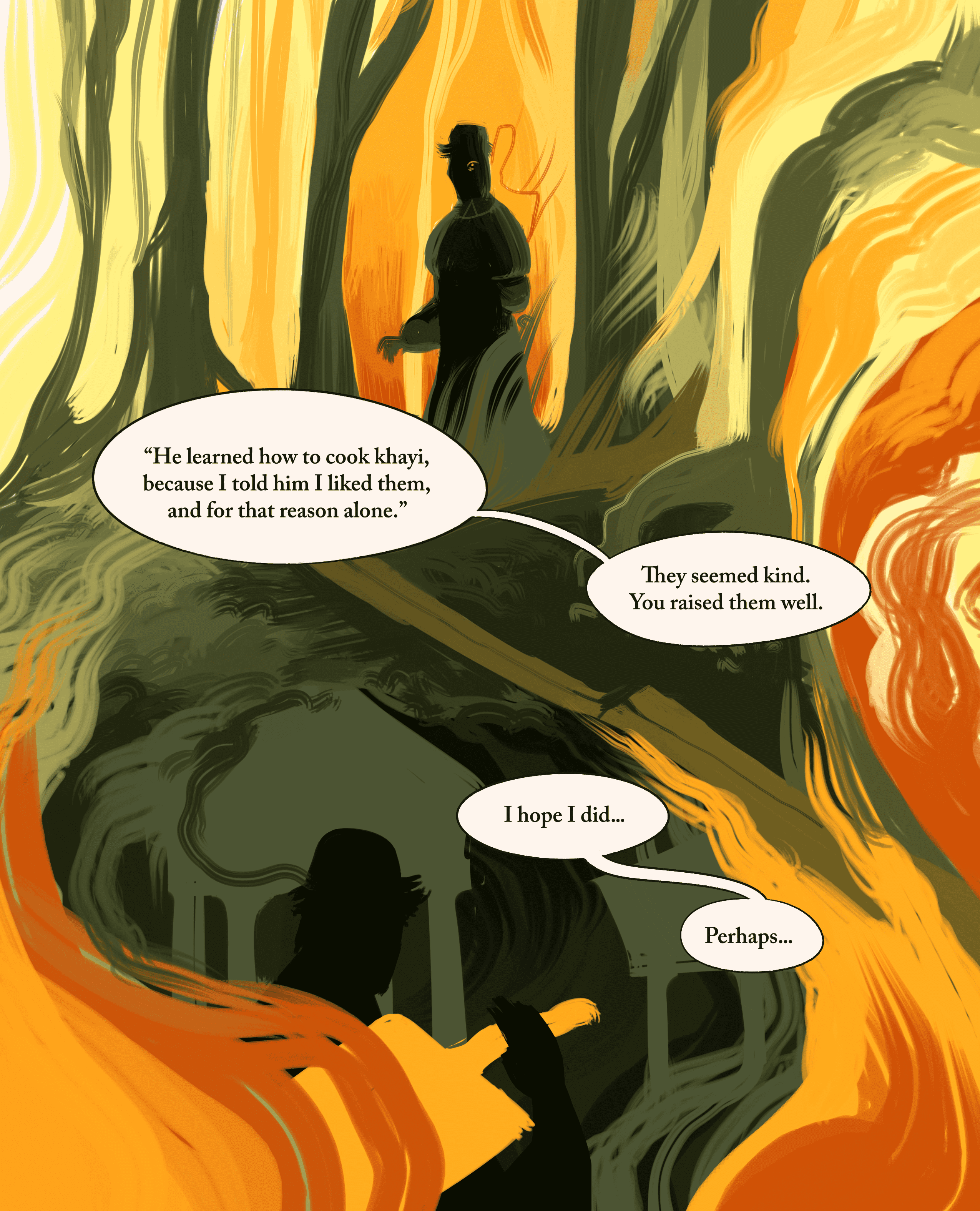 Wooden boardwalks hobble their way along the swamp soil, and Márime atop them, eyes wide. He arrives a shadowed village, its houses perched on stilts, while he reaches back for his sword.

Ulu continues. "He learned how to cook khayi, because I told him I liked them, and for that reason alone." They sigh, and say: "They seemed kind. You raised them well." 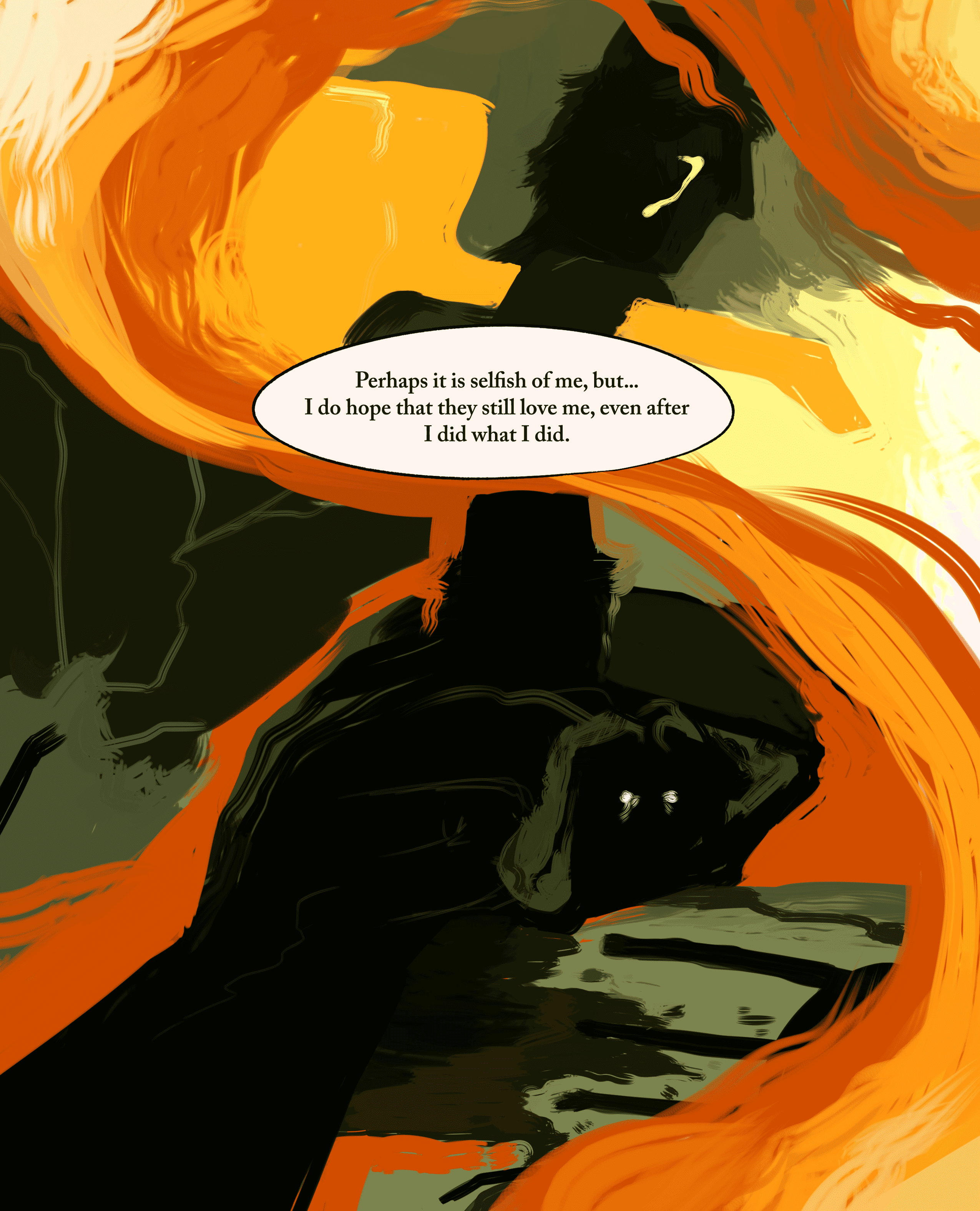 He thinks back to the tears that dripped from his eyes, the way he tightened his grip on his sword.

Márime says: "Perhaps it is selfish of me, but... I do hope they still love me, even after I did what I did."

He thinks of his shadow, cast over the floor of a house. The way the room was trashed, furniture thrown about, the wall cracked. The blood seeping from the curled up and hunched figure cast in the darkness of Márime's shadow. Their once-human eyes, shining brightly as they hugged their decaying arms over their head. 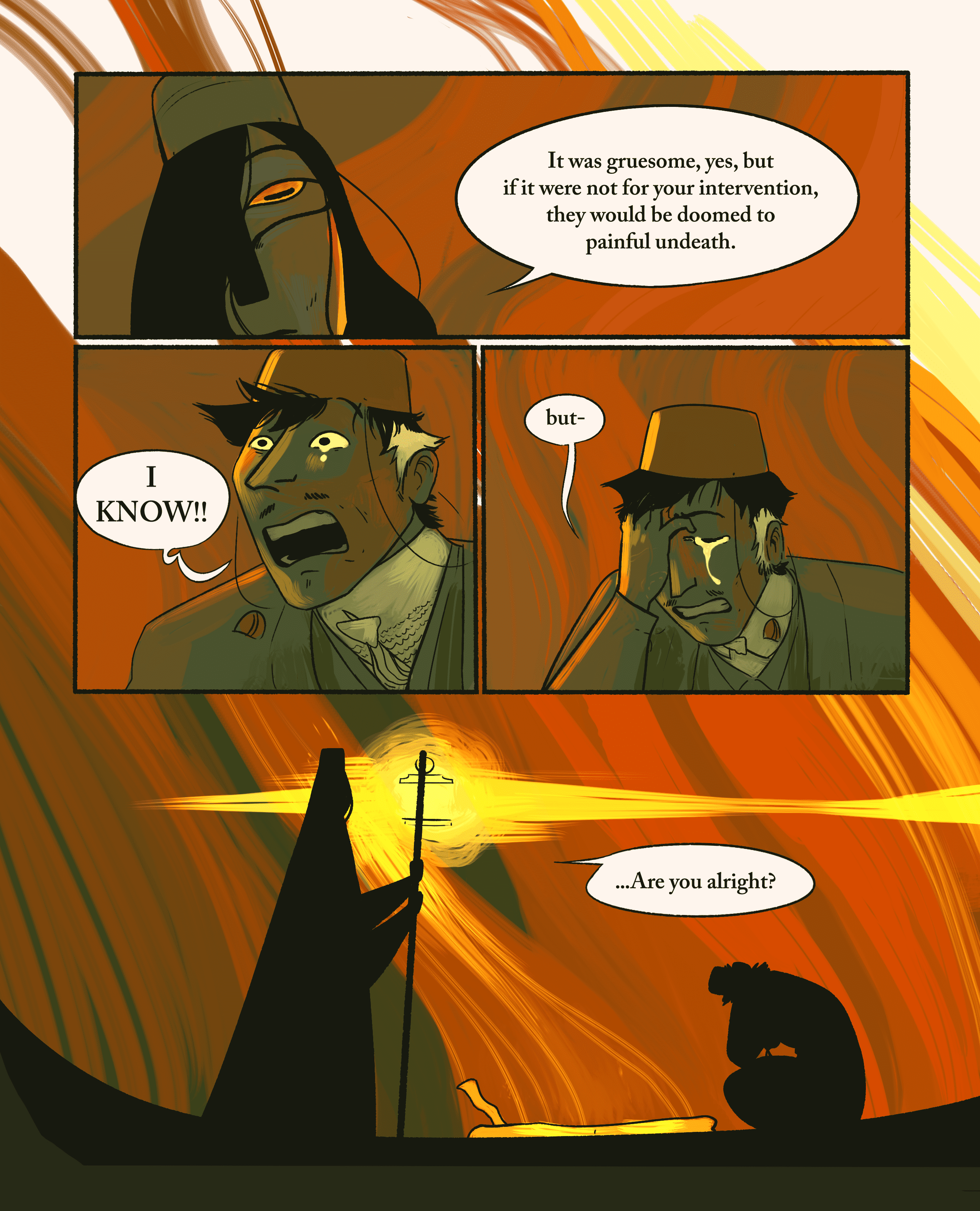 He returns to the present.

Ulu says: "It was gruesome, yes, but if it were not for your intervention, they would be doomed to painful undeath."

Márime cries out! "I KNOW!! But-" His outburst turns into tears, and he grips his face tightly.

In the mist, there is only silence, for a long moment.

But Ulu still rows. Their lantern sings a bright near-white, spearing the swirling mist. "...Are you alright?" they ask. 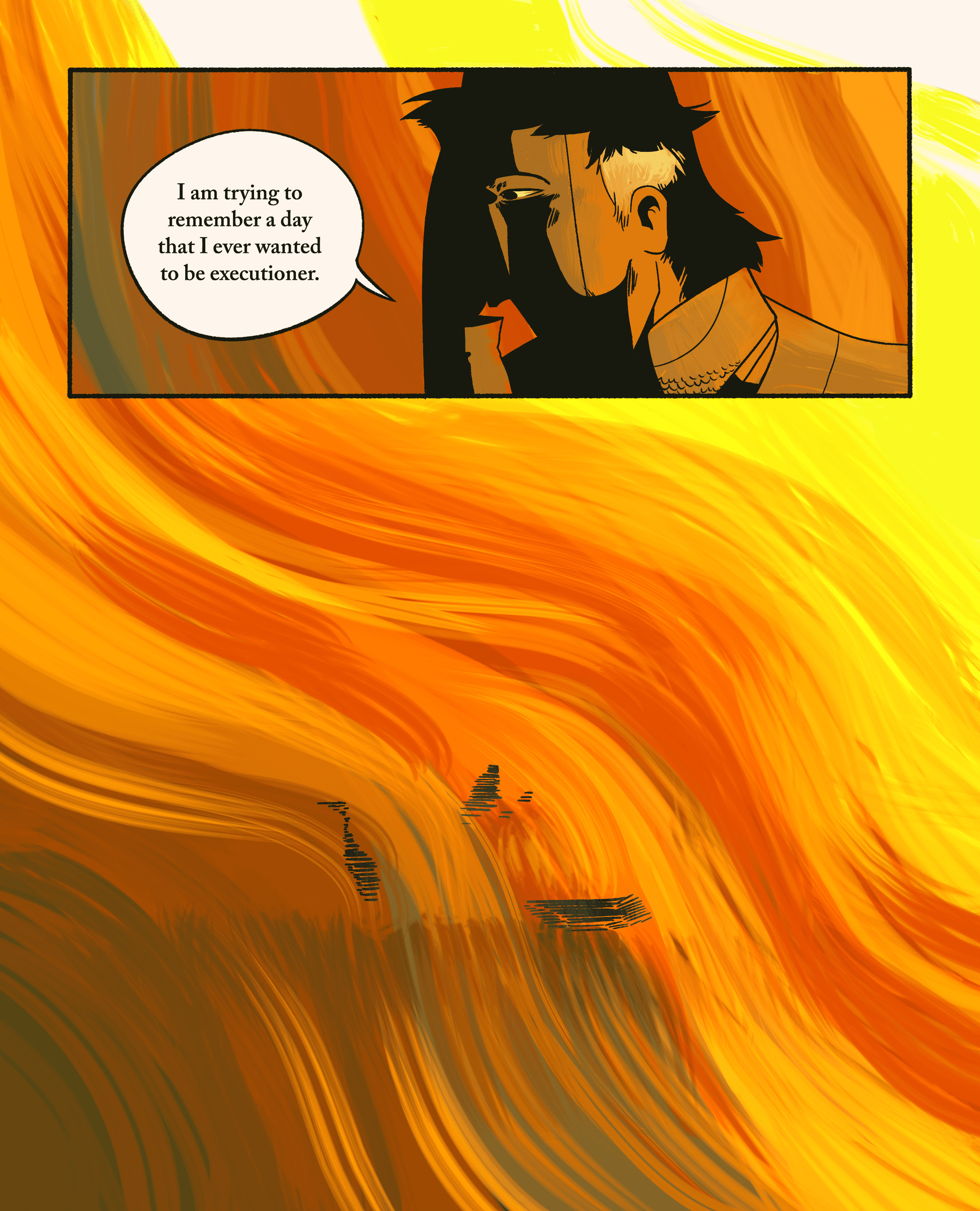 The water's mists turn their most vivid oranges, overwhelming the boat, and the world entirely. Márime's face is cast in both light and shadow.

His face pressed, heavy, into his hand, he croaks: "I am trying to remember a day that I ever wanted to be executioner."

The boat passes and fades into the light.