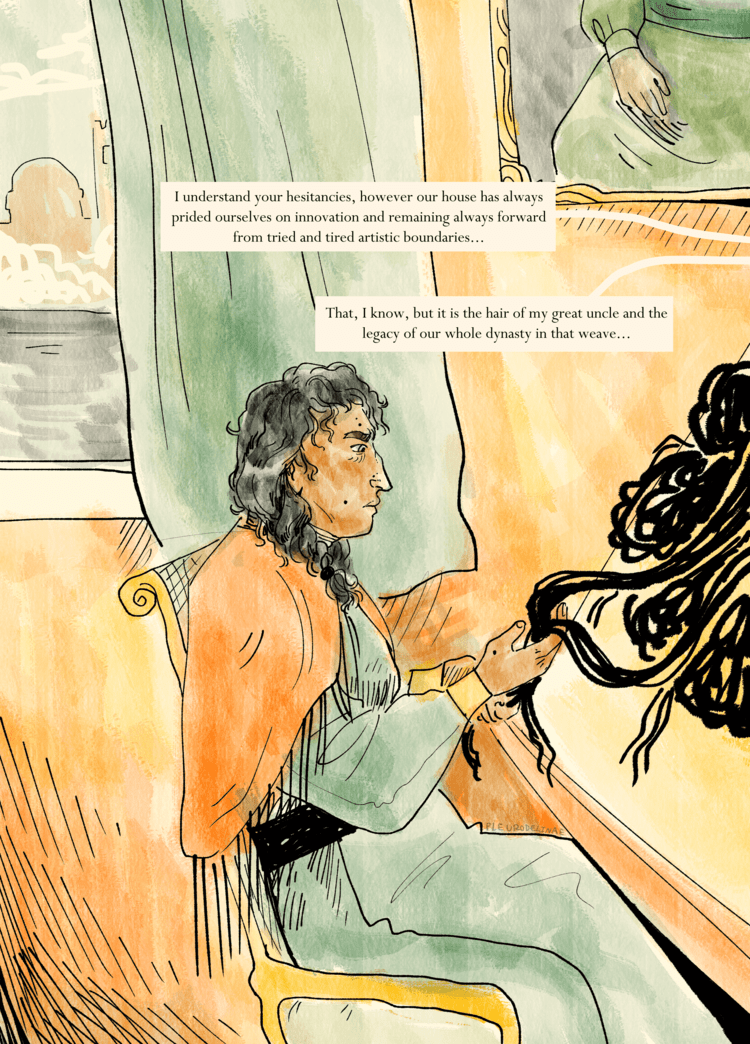 In the watery city of Adravezia, Isolia Alle'manne sits at a tilted-up table inside her family studio, weaving at strands of hair with a deep frown. She's a brown-skinned girl whose curly black hair comes down to her chest in two chunky braids.

Through the wall, a faint back-and-forth can be heard:

"I understand your hesitancies, however our house has always prided ourselves on innovation and remaining always forward from tried and tired artistic boundaries..." says one.

"That, I know, but it is the hair of my great uncle and the legacy of our whole dynasty in that weave..." counters the other. 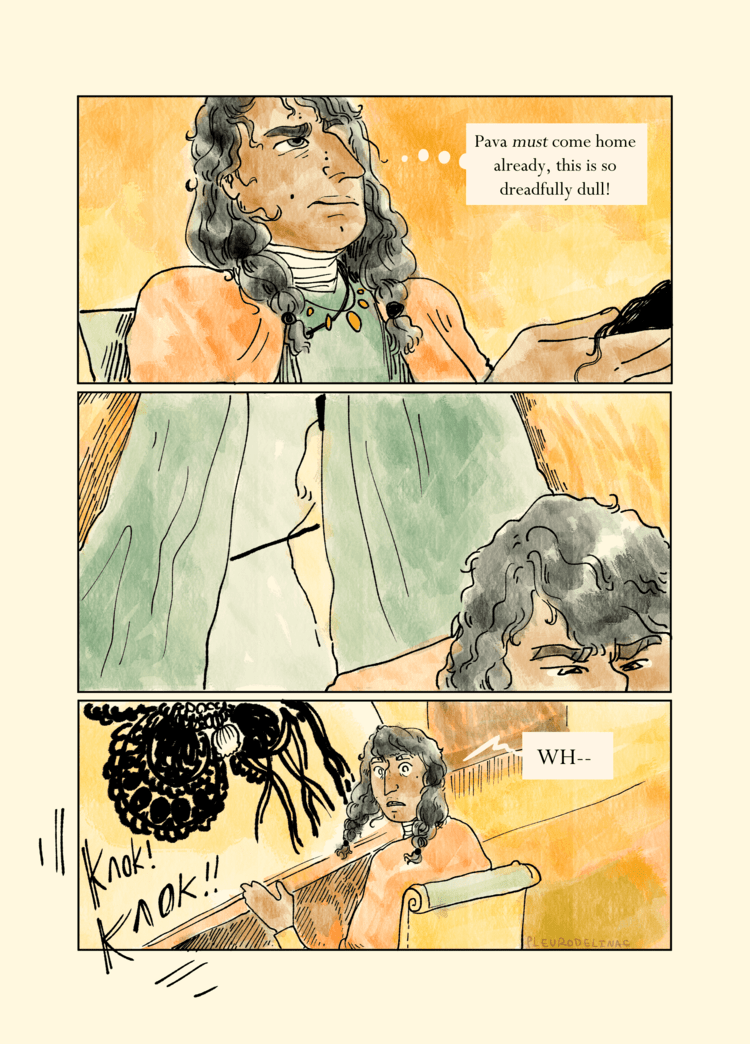 Isolia sighs roughly and thinks to herself: "Pava must come home already, this is so dreadfully dull!

She continues weaving. So concentrated is she that she doesn't notice the silhouette peering down through the window until there are two loud knocks.

She flinches in place and whips her head around, eyes wide. She begins to cry "WHAT?" but stops herself... 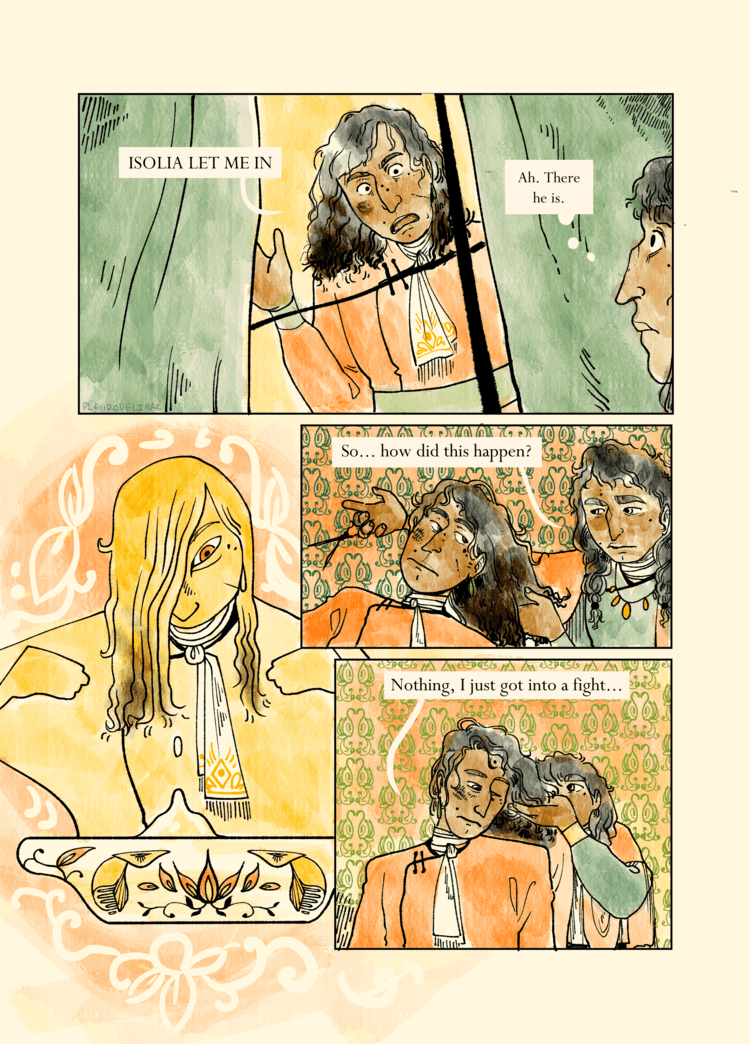 ...for it is her brother, Pava, who smacks his palm against the window and cries "ISOLIA LET ME IN!"

She takes in the bruise on her brother's cheek and his hair, loose, and the ends of it heavy with damage. "Ah, there he is," she thinks blankly.

Hunched low and eyes concentrated, Pava leans over the bathroom water basin and washes his hair, but the ends remain frayed and damaged, blackened even further from his natural black.

Isolia grabs his hair and tilts his head back, grabbing for scissors with her other hand. She takes in the damage. "So..." she says, "how did this happen?"

With an exhausted slump of his shoulders, Pava shuffles back to give her a better angle to start cutting his hair. "Nothing," he sighs, "I just got into a fight..." 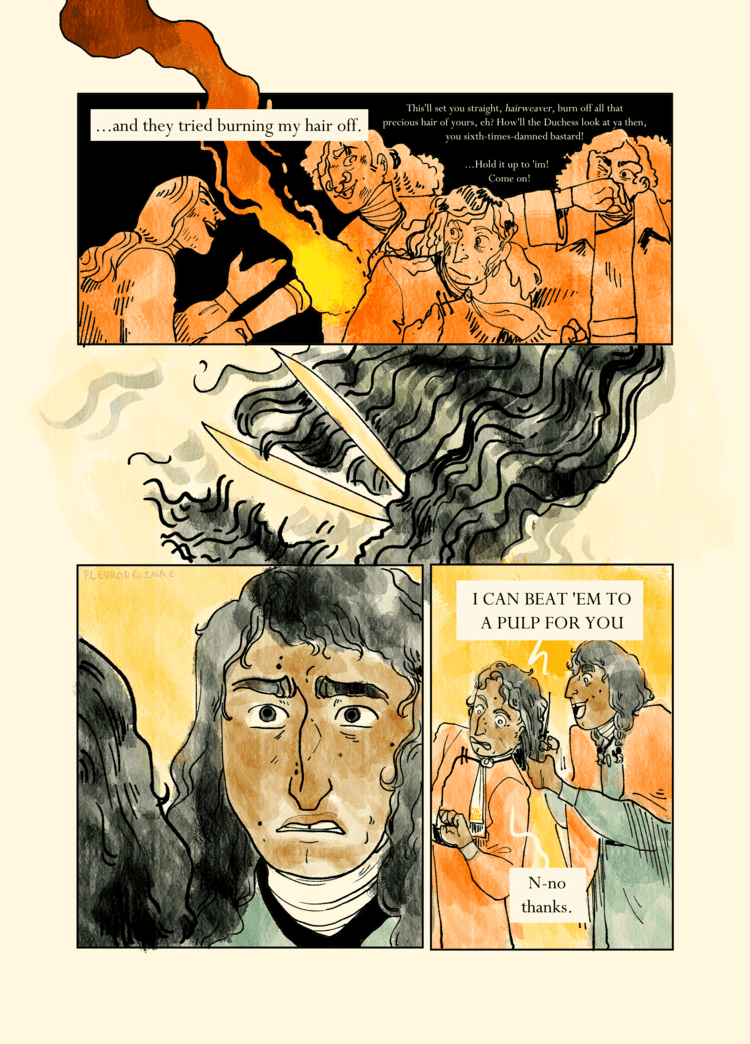 "...and they tried burning my hair off."

He thinks back to the event. His eyed, scared eyes. Being held and forced in place by rich, long-haired fellows whose noses and cheeks he split til they bled. The cry of: "This'll set you straight, hairweaver, burn off all that precious hair of yours, eh? How'll the Duchess look at ya then, you sixth-times-damned bastard!" as a lit torch is held up to his ponytail.

Isolia cuts off the burnt ends of his hair.

She looks at the back of her brother's head with a disgusted look, but after a minute of thinking she immediately grins (as she yanks her brother's hair) and cries: "I CAN BEAT 'EM TO A PULP FOR YOU!"

Pava, wincing as his tender scalp is yanked, stammers out: "N-no thanks." 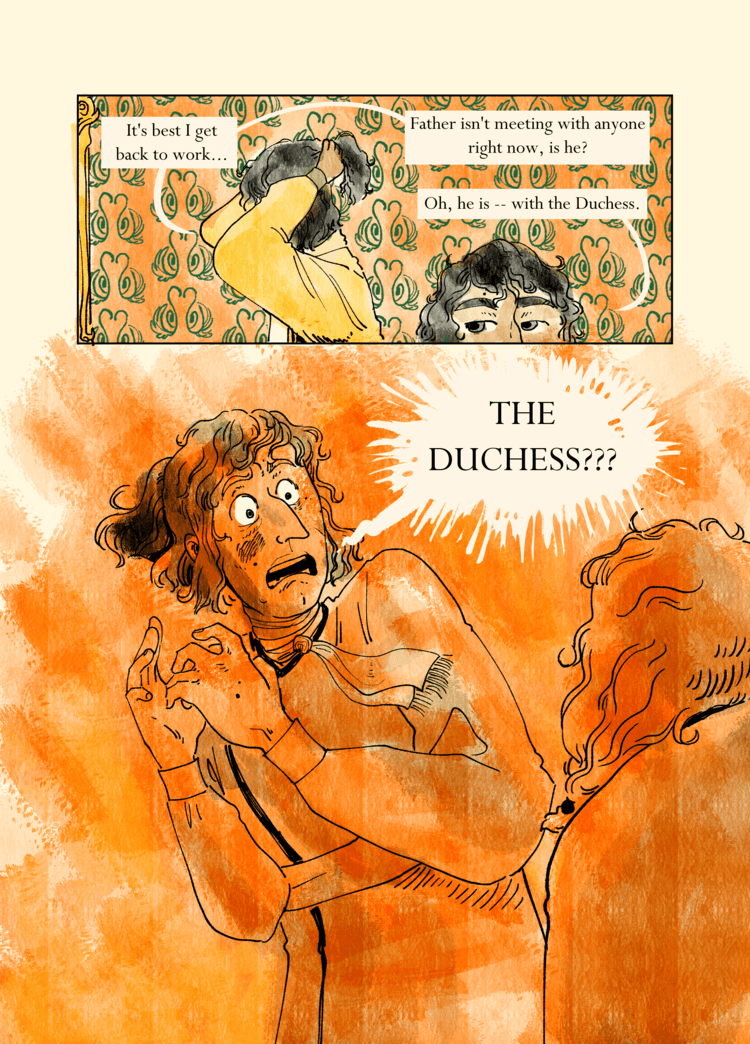 Once the cut is finished, and Pava's hair is shorter, he moves to pull up the back in a high ponytail while Isolia puts away the scissors.

"It's best I get back to work," he says. "Father isn't meeting with anyone right now, is he?"

Isolia glances in his direction. "Oh he is -- with the Duchess."

Eyes wide and fingers spasming in shock and anxiety, Pava whips his head around, curls flying, and cries horrified to his sister: "THE DUCHESS???" 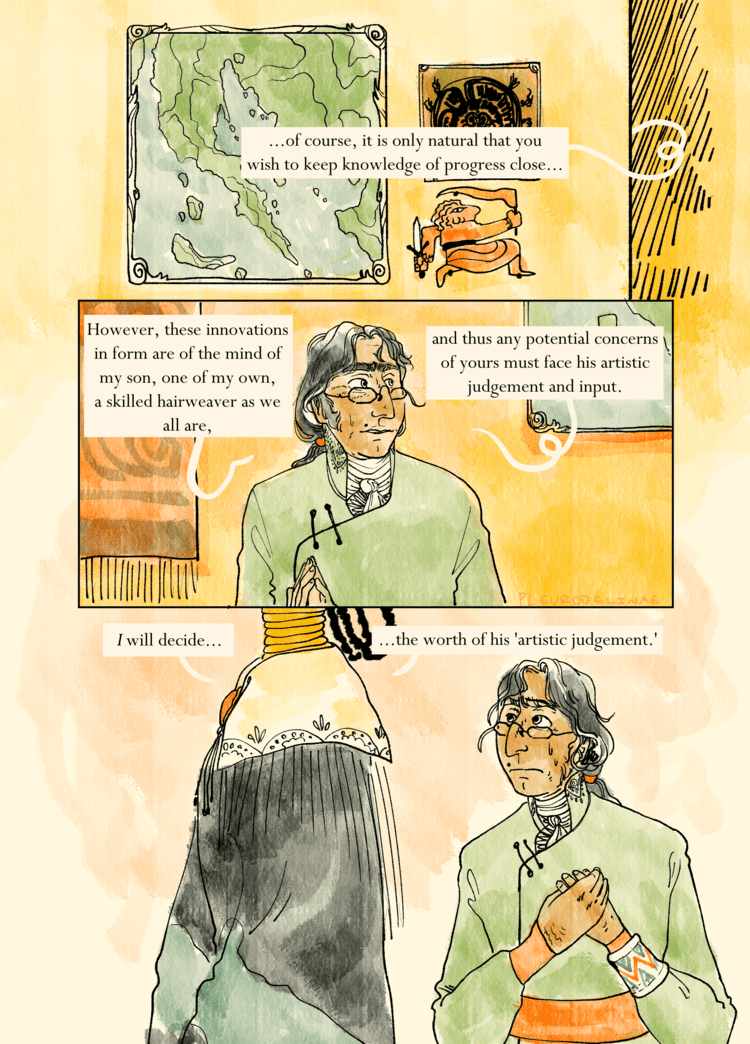 Elsewhere in the house, past the crook of a wall (hung on the plaster a map of the city and wider lagoon area, a small woven hair-crest, and a puppet of a warrior), the voices of the Duchess and father Alle'manne can be heard as they round the corner and into Pava's work room.

"Of course it is only natural that you wish to keep progress close," says Mr. Alle'manne, a quaint, short fellow with a low ponytail and hexagonal spectacles, fingers steepled together nervously and sweat beading on his cheek, "However, these innovations in form are of the mind of my son, one of my own, a skilled hairweaver as we all are. And thus, any potential concerns of yours must face his artistic judgement and input."

The tall, tall Duchess walks right past him. "I will decide," she insists, "the worth of his 'artistic judgement'." 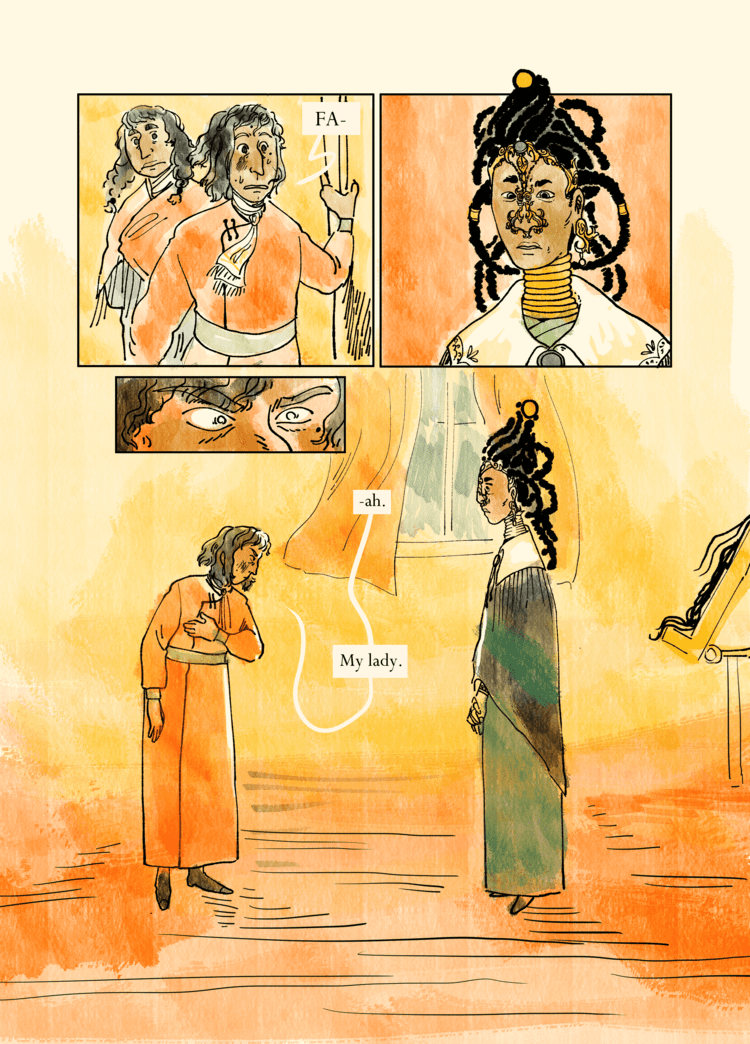 Out of the bathroom run Pava and Isolia. Pava is about to cry out "FATHER!" but stops when he sees the long, elegant, intimidating face of the Duchess, long neck roped in gold bands, and braided hair so long it can spiral up her scalp and around her abundant face jewelry, her head, down her neck, in intricate designs. She looks at him evenly.

Pava stops in his tracks, and remembers reluctantly to bow. "-ah," he says. "My lady." 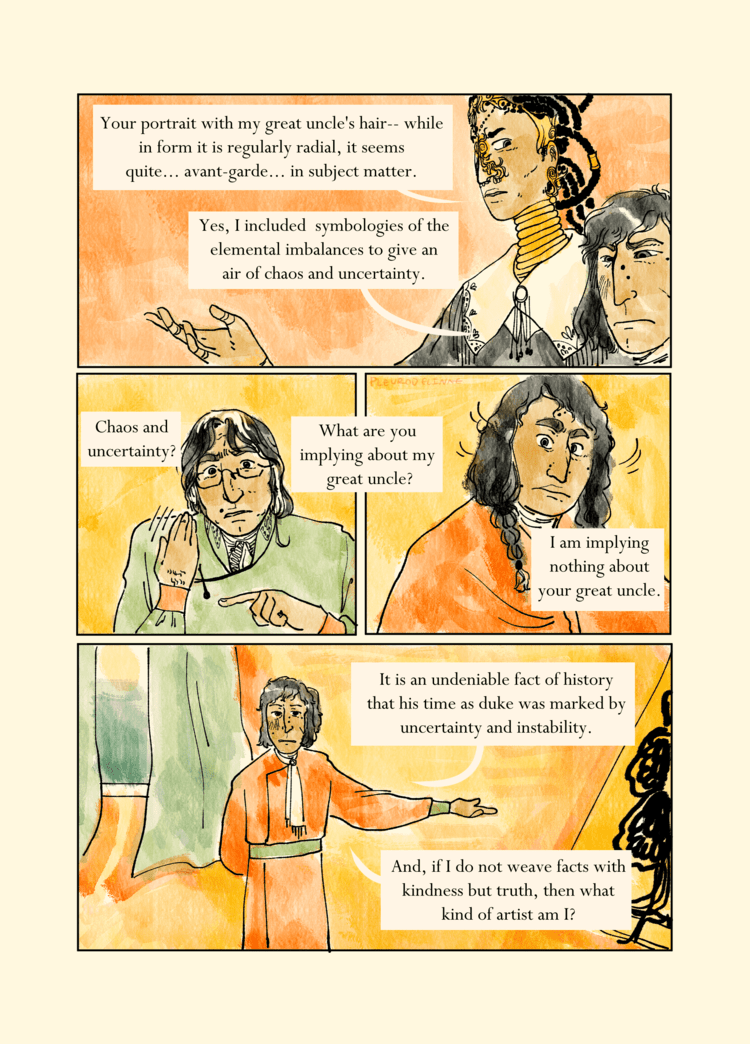 The Duchess gestures to his work, still unfinished on the worktable, with a sour glance down at him. "Your portrait with my great uncle's hair," she says, "while in form it is regularly radial, it seems quite... avant-garde... in its subject matter."

Pava purses his lips and insists: "Yes, I included symbologies of the elemental imbalances to give an air of chaos and uncertainty."

The two continue to argue. "Chaos and uncertainty?" The Duchess asks. "What are you implying about my great uncle?" Pava huffs: "I am implying nothing about your great uncle."

As this happens, father and daughter Alle'manne share a silent conversation: father gestures in a cutting motion around his nape and points at Pava, while daughter furiously shakes her head at him, as if saying: not now!

Pava, still talking to the Duchess, walks next to the work table and gestures, face deep in a frown, bruise still marring his cheek. He continues: "It is an undeniable fact of history that his time as duke was marked by uncertainty and instability. And, if I do not weave facts with kindness but truth, then what kind of artist am I?" 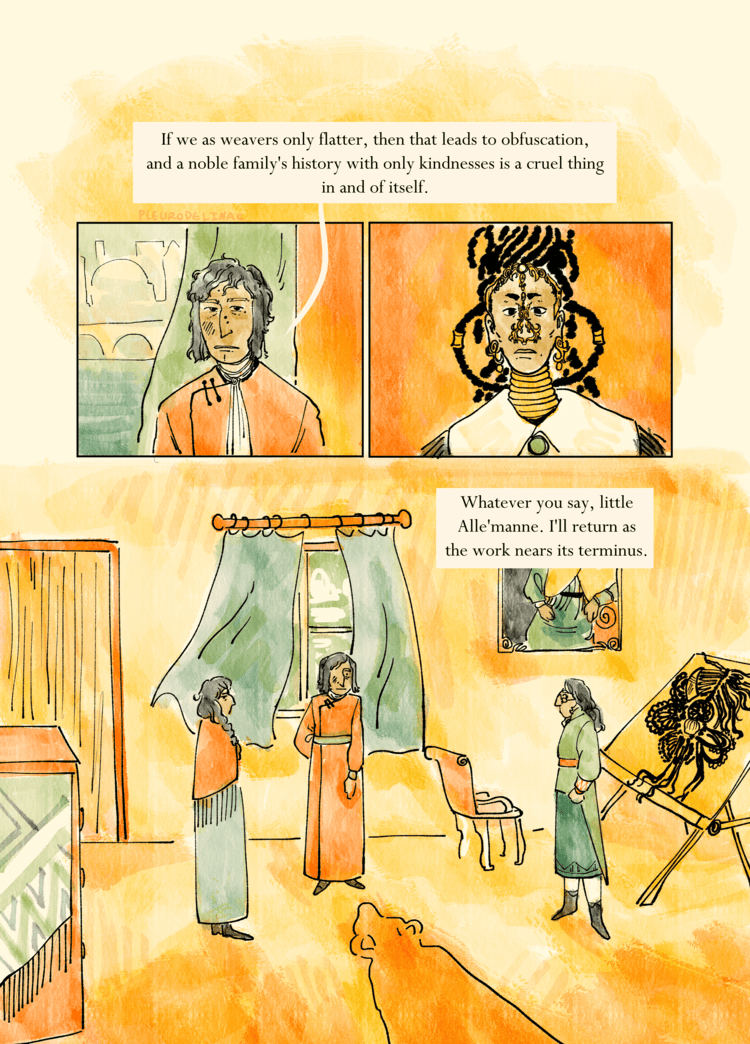 His eyes narrow as he regards the Duchess head on. "If we as weavers only flatter," he says, "then that leads to obfuscation, and a noble family's history with only kindnesses is a cruel thing in and of itself."

For a long moment, the Duchess simply watches him. Then, firmly and brusquely, she turns around and walks out of the studio, leaving these three Alle'manne hairweavers to stare at her departure in the studio. "Whatever you say, little Alle'manne." She says. "I'll return as the work nears its terminus." 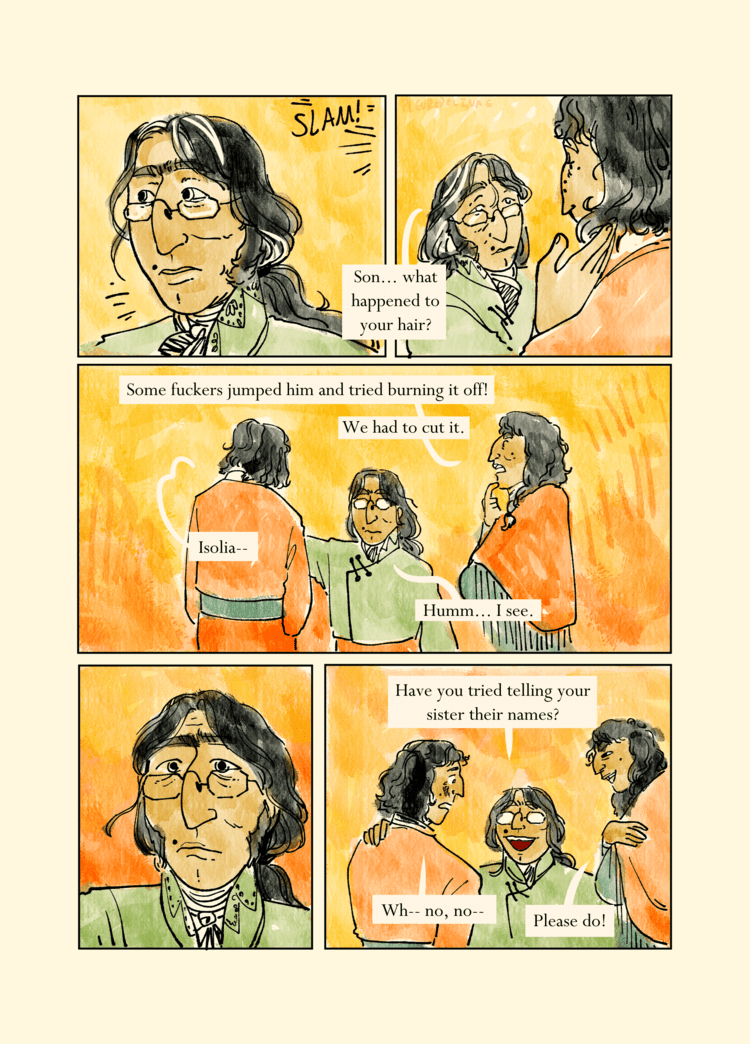 The second she slams the door, father Alle'manne turns to his son and walks over, a hand hesitantly raising to his son's cut locks. "Son..." he begins slowly, "what happened to your hair?"

Before Pava can respond, Isolia cuts in, much to Pava's stammering. "Some fuckers jumped him and tried burning it off! We had to cut it."

Father Alle'manne hums, then stares at his son with an open and genuine look. Heartfelt and fond. Before, of course, he blurts: "Have you tried telling your sister their names? 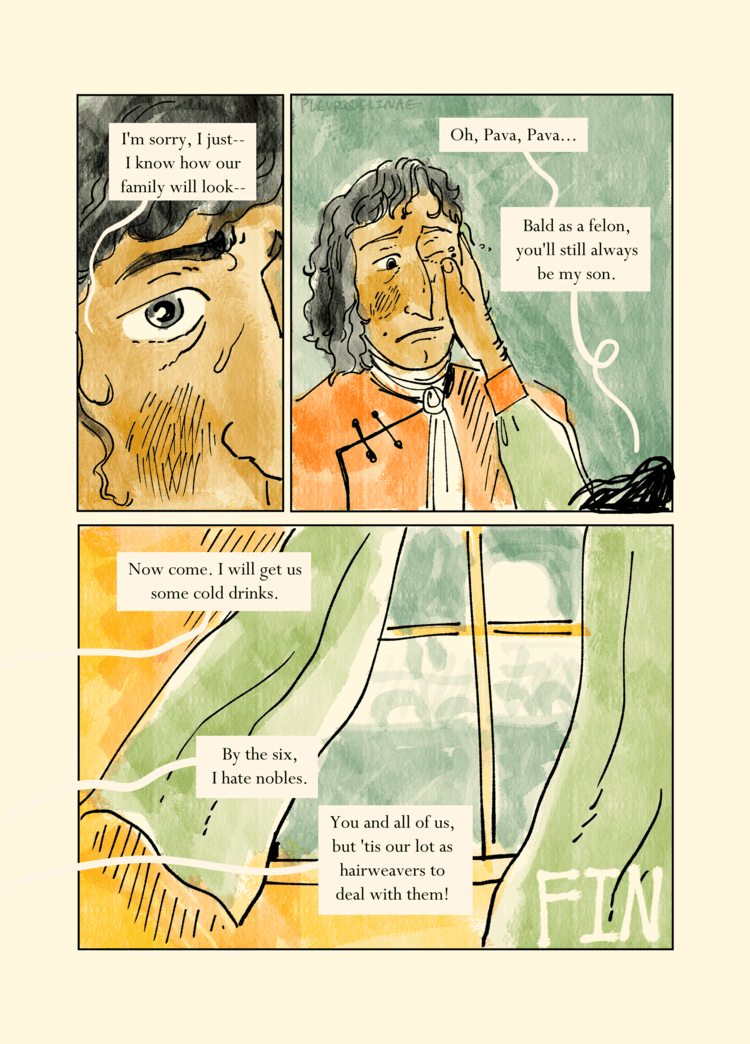 Pava sweats, wide eyes tearing up. The bruise still marrs his cheek. "I'm sorry," he gets out, "I just -- I know how our family will look--"

Father Alle'manne interrupts with a firm hand on Pava's cheek, stroking his tears away with a rough thumb. "Oh, Pava, Pava..." he croons, "Bald as a felon, you'll still always be my son."

The family exits the room in lieu of another part of the house. "Now come," the father insists, "I will get us some cold drinks."

"You and all of us," Pava quips back sardonically, "but 'tis our lot as hairweavers to deal with them!"

The window curtains shift and flow leisurely, without concern or care. Through the glass of the window, the domed and square roofs of a different district of Adravezia, across the azure waters of the lagoon, can be seen silhouetted. The sky is clear and warm. FIN.

A Matter of Hair's Length

The length of your hair is a great indicator of class in the city of Adravezia.

I am currently dipping my toes into building a new world -- specifically one on a similar level of 'separation from real-world allusions', so to speak, as Menoyukh'al. This comic is a taste of some initial thoughts about it.

Anyways, I haven't comicked in a hot minute, so this was fun to do.